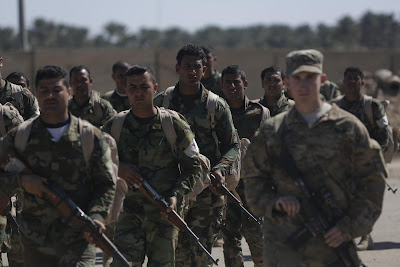 WASHINGTON, March 12, 2017 — Indigenous Iraqi and Syrian forces have made tremendous progress taking the fight to the Islamic State of Iraq and Syria, and Americans should be very proud of the role played in the effort by a small number of U.S. troops, the chairman of the Joint Chiefs of Staff said during an interview.
When Marine Corps Gen. Joe Dunford took over as chairman in October 2015, ISIS had taken vast portions of Iraq and Syria and sought to establish a caliphate. The counter-ISIS strategy he inherited sought to train local forces to combat the terror organization.
This meant small numbers of American and coalition troops would work with Iraqi and vetted Syrian forces. Coalition air assets, special operators and artillery units would support the campaign.
“The Iraqis have to be very proud of their forces,” Dunford said. “But I think we have to be very proud of the coalition, and what U.S. forces have accomplished.”
Iraqi forces pushed back ISIS in Ramadi and Beiji and are now pushing into western Mosul -- the largest city taken by ISIS. The strategy is working, the chairman said, and it’s because young American service members are doing the hard work every day to make it happen.
“If you think of the relatively small number of Americans that had deployed to Iraq over the past 18 to 24 months,” he said, “… if you think about how hard they had to work in conjunction with Iraqi security forces to make sure we learned the lessons from Ramadi and Anbar province … and applied those lessons with the right capabilities in Mosul; I’ll just tell you I am proud of the force that has done that.”
The Task Ahead
There still remains much to do in Iraq, the general said, and he is taking nothing for granted.
In Syria, indigenous forces are isolating Raqqa and pushing back well dug-in ISIS forces on all fronts. There, the progress has been dependent on an even smaller number of Americans who worked to recruit, train and strengthen counter-ISIS forces.
“We sent those guys into an incredibly complex environment,” Dunford said. “We told them to go in collect intelligence, develop relationships, vet people and identify people willing to take the fight to the enemy, train those people, equip those people, support those people, and win.”
And those special operations forces and U.S. Air Force personnel did it -- day after day, little by little, and under extreme circumstances, the chairman said.
“The fact that we are now talking about divergent political challenges, the fact that we are now addressing questions of what happens after Mosul or Raqqa, we shouldn’t lose sight of the fact that it is a reflection of the members of the joint force that have actually enabled the indigenous force to take the fight to the enemy,” Dunford said. “Now we have the political opportunities that we didn’t have two years ago to establish the framework for long-term peace and stability, and we owe it to them.”
Note: In the above U.S. Army photo by Sgt. Paul Sale Iraqi soldiers enrolled in the Iraqi ranger course conduct a road march under the supervision of U.S. soldiers with 1st Battalion, 32nd Infantry Regiment at Camp Taji, Iraq, March 7, 2016. The Iraqi ranger course is an advanced infantry fighting school established to help train special operations soldiers for the Iraqi Army.
Posted by Paul Davis at 2:03 PM