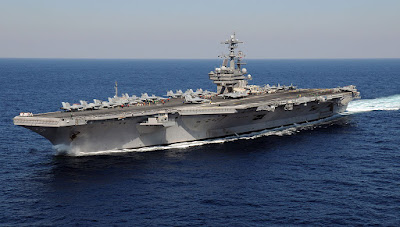 Rear Adm. Kenneth R. Whitesell, commander, CSG 2, said the missions are part of the key to accelerating the fight against ISIS.

"The superb efforts made by the men and women of this strike group will be critical to continuing this fight," said Whitesell. "The George H.W. Bush Carrier Strike Group brings a flexible, mobile and lethal multi-mission strike force to work with our allies and partner nations to engage ISIS and the threat they pose to the region and the greater international community."

Whitesell credited the strike group's readiness on the extensive training leading up to deployment.

"This is what we've been training for," said Whitesell. "We're ready to support the mission wherever and whenever we're needed. We have a crew of highly-trained, warfighting professionals ready for this mission, and I know that we, along with our allies and regional partners, will be successful."

OIR is the unwavering resolve and commitment of the U.S and partner nations in the region and around the globe to eliminate the terrorist group ISIS and the threat they pose. 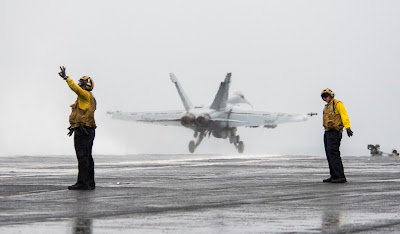 In the above and below U.S. Navy photos by Mass Communication Specialist 3rd Class Christopher Gaines F/A-18E Super Hornets attached to the "Golden Warriors" of Strike Fighter Squadron (VFA) 87 launche from the flight deck of the aircraft carrier USS George H.W. Bush. 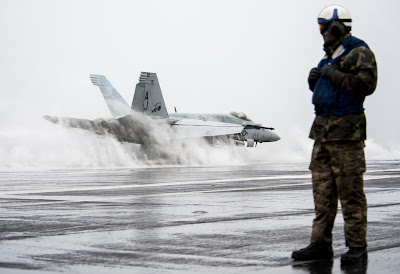 Note: You can click on the above photos to enlarge.
Posted by Paul Davis at 1:12 PM