My Washington Times Review of 'Dodge City: Wyatt Earp, Bat Masterson, And The Wickedest Town In The American West' 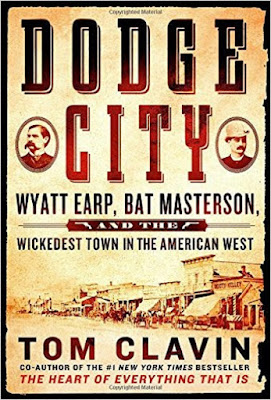 The Washington Times published my review of Tom Clavin's Dodge City: Wyatt Earp, Bat Masterson, and the Wickedest Town in the American West.

For those of us who came of age in the 1950s and 1960s, popular TV programs were our introduction to Dodge City and Wyatt Earp and Bat Masterson, two of the Wild West town’s legendary lawmen.

As a kid I was a huge fan of Hugh O’Brian’s portrayal of Wyatt Earp and Gene Barry’s portrayal of Bat Masterson. I was also a fan of the long-running TV series “Gunsmoke,” which featured Dodge City as the town where James Arness’ fictional U.S. Marshall Matt Dillon had his many adventures. A new generation of fans now watch and enjoy the old reruns of these shows on cable stations.

Although the TV shows were entertaining, as I grew older and read history I learned that the shows about Wyatt Earp and Bat Masterson were historically inaccurate and they were based in large part on books that had exaggerated their life stories. Mr. Earp and Mr. Masterson in their golden years also told exaggerated tales about themselves and each other.

The odd thing is that no exaggeration was truly necessary, as the true exploits of Mr. Earp and Mr. Masterson are certainly dramatic and interesting enough, as we learn from Tom Clavin’s excellent book, “Dodge City: Wyatt Earp, Bat Masterson, and the Wickedest Town in the American West.”