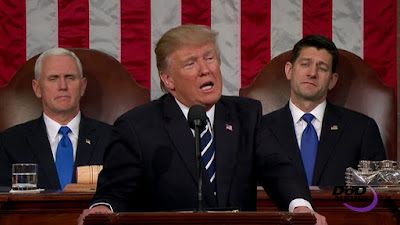 WASHINGTON, March 1, 2017 — President Donald J. Trump told a joint session of Congress last night that the United States will work with a coalition to “extinguish” the Islamic State of Iraq and Syria from the planet.
Trump also told Congress he will forward a fiscal 2018 budget request that will increase defense spending by $54 billion and eliminate sequestration.
Carryn Owens, the widow of fallen Navy SEAL Senior Chief Petty Officer William "Ryan" Owens, received a standing ovation from Congress. Carryn sat in the gallery with First Lady Melania Trump.
“Ryan died as he lived: a warrior, and a hero -- battling against terrorism and securing our nation,” Trump said during his address. The nation will never forget Owens’ sacrifice for the United States as he fought terrorists in Yemen, the president said.
Trump listed what he has done since taking office just over a month ago. This includes directing the Defense Department to work with other agencies to develop a plan to destroy ISIS. Defense officials delivered that plan to the White House this week.
The president also imposed new sanctions on entities and individuals who support Iran’s ballistic missile program, ordered a review of military readiness and pledged to rebuild the armed forces.
Fight, Win
“To keep America safe we must provide the men and women of the United States military with the tools they need to prevent war and -- if they must -- to fight and to win,” Trump said.
The fiscal 2018 defense budget request will rebuild the military and eliminate sequester, he said. It will contain one of the largest defense spending increases in American history, Trump said.
“The challenges we face as a nation are great, but our people are even greater,” he said. “And none are greater or braver than those who fight for America in uniform. To those allies who wonder what kind of friend America will be, look no further than the heroes who wear our uniform.”
America will lead based on the vital national interests of the United States and its partners around the world, Trump said.
“Our foreign policy calls for a direct, robust and meaningful engagement with the world,” he said.
Supports NATO
The United States strongly supports the North Atlantic Treaty Organization and other allies in the Middle East and the Pacific, the president said.
“But our partners must meet their financial obligations,” he added.
“We expect our partners … to take a direct and meaningful role in both strategic and military operations, and pay their fair share of the cost,” Trump said. “We will respect historic institutions, but we will also respect the sovereign rights of nations.”
The United States will reach out to other nations to find new friends and forge new partnerships, the president said. “We want harmony and stability, not war and conflict,” he said. “We want peace, wherever peace can be found.”
Trump noted that Germany and Japan -- now among America’s closest allies -- fought the United States during World War II.
“This history should give us all faith in the possibilities for a better world,” the president said. “Hopefully, the 250th year for America will see a world that is more peaceful, more just, and more free.”
Posted by Paul Davis at 1:28 PM