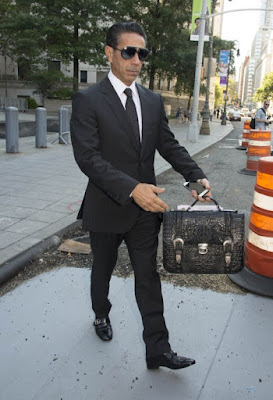 Kaja Whitehouse at the New York Post offers a piece on the potential failure of a federal case against reputed organized crime figures from Florida, Philadelphia and New York.

They could soon be breaking out the Chianti on Arthur Avenue.

A group of reputed mobsters may be spared a trip up the river because the criminal case against them has run into big trouble — thanks to some bungling by the feds, The Post has learned.

Reputed Genovese capo Pasquale “Patsy” Parrello — who owns the Bronx sauce joint Pasquale’s Rigoletto Ristorante on Arthur Avenue — and notorious Philly mob boss Joseph “Skinny Joey’’ Merlino are among 46 Mafiosi now hoping the charges may be dropped against them in their racketeering case.

The group, which includes members of four of the five major Mafia crime families, was rounded up in a massive bust in August.

But federal prosecutors last week alerted their defense lawyers that two FBI agents and a supervising agent in the case are being probed internally about their interactions with a key witness, sources told The Post.

The government is investigating a failure by the agents to memorialize debriefings with witness, John Rubio, a Genovese associate who wore a wire against his cronies, according to a sealed letter to the court last week.