How The Soviets Once Recruited Ernest Hemingway To Be A Spy 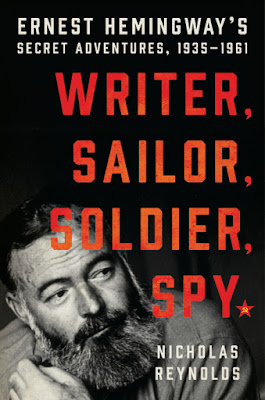 Robert Rorke at the New York Post offers a piece on a new book about Ernest Hemingway and how he was recruited by the Soviets to be a spy.

A provocative article about US veterans killed during a deadly 1935 hurricane in the Florida Keys brought Ernest Hemingway, journalist and best-selling author of “The Sun Also Rises” and “A Farewell to Arms,” to the attention of Soviet intelligence. The veterans had been hired by the Roosevelt administration to build a bridge, and Hemingway, a Key West resident who had been an ambulance driver in Europe during World War I, discovered their corpses while cruising in his boat, named Pilar.

“Hemingway had not seen so many dead men in one place since 1918,” writes Nicholas Reynolds in his new book, “Writer, Sailor, Soldier, Spy.” Hemingway was so outraged by the way they were treated, their rotting bodies left in the water, he wrote an incendiary article about the debacle for the niche Marxist magazine New Masses. The piece also got noticed by Soviet intelligence, which tracked potential foreign sympathizers to the Communist cause.

Reynolds’ book describes Hemingway’s “conversion experience” as a result of this tragedy. From the Spanish Civil War to the end of World War II, he would become a champion of the oppressed, using his reputation as a celebrated novelist and journalist to fight fascism. It was a stance that made him a desirable candidate for both Soviet espionage and American intelligence operations. And Hemingway — maintaining his status as a free agent while stoking his ego — flirted with both sides.

Note: Like another favorite writer of mine, Dashiell Hammett, Hemingway was attracted foolishly to the Soviets because of his anti-Fascist stance. Of course, the Soviet Union later made a pact with Hitler and the Nazis, and they confused the issue for the American leftists.

But in Hemingway's favor, in his novel about the Spanish Civil War, For Whom the Bell Tolls, he offered passages on the atrocities committed by both sides. This was looked at unfavorably by the Soviets.
Posted by Paul Davis at 3:06 PM