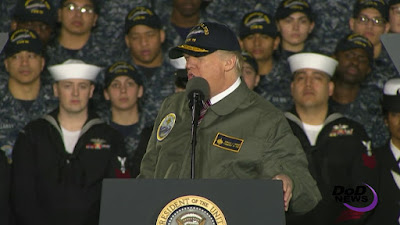 Jim Garamone at the DoD News offers the below report:
WASHINGTON, March 2, 2017 — President Donald J. Trump today promised to rebuild the U.S. military and called for a 12-carrier Navy during a visit to the future USS Gerald R. Ford in Newport News, Virginia.
Trump addressed the pre-commissioning unit of the Navy’s newest aircraft carrier on the ship’s hangar deck. He told the crew that if Congress passes his budget, the military “will win again.”
“The proud dignity of the ship is a fitting tribute to Gerald Ford – the man and the president,” Trump said. He congratulated the men and women of Newport News Shipbuilding who labored on the aircraft carrier – the first of its class and the first new carrier design since the Nimitz-class began joining the fleet in 1975. The $13 billion carrier will be commissioned later this year.
“This warship and all who serve on it should be a source of shared pride for our nation,” the president said. 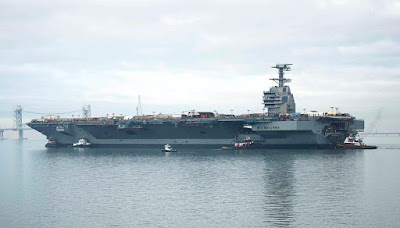 Rebuilding Military
Defense Secretary Jim Mattis accompanied the president to the carrier, and Trump said the secretary has been charged with rebuilding the U.S. military. “We will give the men and women of America’s armed services the resources you need to keep us safe,” he said. “We will have the finest equipment in the world – planes, ships and everything else.
“We will give our military the tools you need to prevent war and, if required, to fight war and only do one thing: win.” he continued. “We’re going to start winning again.”
The U.S. military needs stable, consistent funding, the president said.
“In these troubled times, our Navy is the smallest it’s been since World War I,” he said. “That’s a long time ago. In fact, I just spoke with Navy and industry leaders and have discussed my plans to undertake a major expansion of our entire Navy fleet, including having the 12-carrier Navy we need.”
Trump said America has always led, and will continue to do so. “My budget will ensure we do so and continue to do exactly that,” he said. “American ships will sail the seas. American planes will soar the skies. American workers will build our fleets.”
The president said the big-deck carriers are the centerpiece of America’s military might. “We are standing today on 4.5 acres of combat power and sovereign U.S. territory, the likes of which there is nothing to compete,” he said.
He called the Ford a “monument” to American might. The ship will have a smaller crew than the Nimitz-class carriers sailing with 4,500 personnel. It will carry 70 aircraft and will be able to project American power to the farthest reaches of the world. “Hopefully, it’s power we won’t have to use,” Trump said. “But if we do, they are in big, big trouble.”
Trump noted that the three aircraft carriers that won the Battle of Midway – the USS Enterprise, USS Yorktown and USS Hornet – against the Japanese fleet in 1942 were built in the same shipyards that produced the Ford. The battle was the turning point of the war in the Pacific.
Midway Heroes
“The sailors at Midway are part of a long line of American heroes, an unbroken chain of patriots from each generation to the next, who rose to defend our flag and our freedom,” the president said. “That legacy continues today as American warriors protect our people from the threat of terrorism.”
Trump told the sailors that his budget calls for an end to sequestration spending cuts and an increase in 2018 of $54 billion for the Defense Department. “After years of endless budget cuts that have impaired our defenses, I am calling for one of the largest defense spending increases in history,” he said.

Note: You can click on the above two U.S. Navy photos to enlarge.
Posted by Paul Davis at 4:41 AM