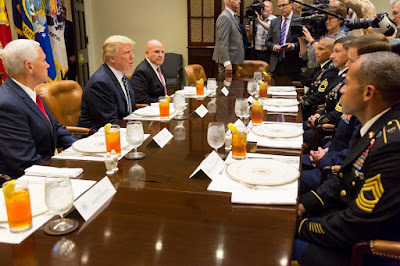 Making the speech at the Ronald Reagan Library in Simi Valley, California, was a tribute to the president who resurrected U.S. confidence when he took office in 1981. The 1970s were not a high point in American history. One president forced to resign, the loss in Vietnam, the Arab oil embargo and Iran breaking into the American embassy in Tehran and holding 55 American citizens hostage set the stage for Reagan’s presidency.

Confidence in the United States and the nation’s influence abroad were at a low point, McMaster said. “The Soviet Union appeared to be on the rise and America, it seemed, was in decline,” he said.

“President Reagan ushered in a dramatic rethinking of America’s role in the world and a dramatic renewal of American confidence. America would not only triumph in the Cold War and beyond but reach a new height of influence and prosperity.”

“Today as we approach the unveiling of the Trump administration’s national security strategy, we are at a similar crossroads,” McMaster said.

Russia and China are subverting the post-World War II political, economic and security orders to advance their own interests at the expense of the United States and its allies, the national security advisor said.

Iran and North Korea are violating the sovereignty of their neighbors, pursuing weapons of mass destruction and exporting terror to other nations. “Jihadist terror organizations such as [the Islamic State of Iraq and Syria] threaten all civilized people in every corner of the world,” he said.

The values that define America are important. President Reagan called America “a shining city upon a hill” and spoke of the suffering of people living under fear and oppression. Americans believe in the value of every human life, McMaster said, and the world should know that is the case.

Trump’s actions have reinforced this, the general said. He ordered attacks on the Syrian airfield from which aircraft laden with chemical weapons launched attacks on their own people. “The president further demonstrated his commitments to American values with changes in the policies toward Cuba, Iran and Venuzuela,” he said.

Using all instruments of national power is at the heart of the strategy. “President Reagan understood that diplomacy and military force were both important and equally vital tools for national power,” McMaster said. “President Trump is aligning diplomatic, economic, military, informational, intelligence and law enforcement efforts since the first days.”

The South Asia strategy is a good example of this, he said. “We would no longer confuse activity with progress,” the general said. “Our military efforts and operations in the region combined with the efforts of our partners would focus on what brought us to Afghanistan in 2001 -- to deny terrorists safe havens that they could use to threaten America and threaten our allies.”

The administration is also clear about the threats facing America, McMaster said. These threats, he said, “emanate from revisionist powers, rogue regimes and jihadist terrorist organizations.”

The approach adopts a realistic view of our security environment, the general said. “For this reason, we do not base national security decisions on rigid ideology, but instead on our core national interests and clearly defined objectives derived from those interests,” McMaster said.

Finally, the approach seeks to understand the dynamic and competitive nature of the security environment. “We must acknowledge that the international system is, above all, characterized by competition, interaction and change,” he said.

The United States wants all nations to develop and compete, “but the competition must be fair,” McMaster said. “Our economic relationships will respect our partners sovereignty and their economic destinies, while ensuring American workers and American companies are not unfairly disadvantaged.”

Note: The above White House photo was taken by Shealah Craighead on July 18, 2017. From left, Vice President Mike Pence, President Donald J. Trump, and National Security Advisor Army Lt. Gen. H.R. McMaster talk with service members during a lunch in the Roosevelt Room at the White House.
Posted by Paul Davis at 11:39 AM