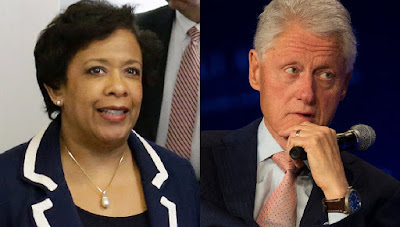 I worked with the FBI when I did security work as a Defense Department civilian in Philadelphia many years ago, and during that time I also attended regular FBI national security briefings in Washington D.C.

Tom Fitton, the president of Judicial Watch, offers his take on Fox News of the FBI’s response to the 2016 meeting of former president Bill Clinton and then-Attorney General Loretta Lynch.

In Washington, the ostensible story is rarely the real story. We know, for example, that former President Clinton engineered a meeting with President Obama’s attorney general, Loretta Lynch, on the tarmac of the Phoenix Airport on June 27, 2016.

That’s the official story, replete with the charming and intentionally disarming detail that all they talked about was their grandchildren. It was just coincidental, don’t you know, that at the time the FBI was looking into Hillary Clinton’s use of a “personal” email server to send, receive and store classified information.

And it was also simply coincidental that just a few days later, the director of the FBI – who served under Attorney General Lynch – announced that he wouldn’t recommend a prosecution of Hillary Clinton.

Richard Nixon must be rolling over in his grave.

http://www.foxnews.com/opinion/2017/12/03/new-documents-reveal-fbis-clinton-cover-up.html
Posted by Paul Davis at 2:41 AM