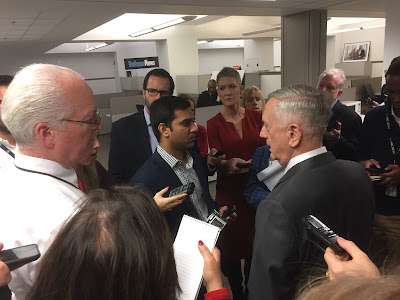 Jim Garamone at the DOD News offers the below piece:

He praised U.S. Ambassador to the United Nations Nikki Haley’s Dec. 14 presentation at Joint Base Anacostia-Bolling here that highlighted Iran’s illegal arms program. Haley stood in front of an Iranian missile that Iran’s proxy – the Houthis – fired at Riyadh International Airport, a civilian target in Saudi Arabia. The missile didn’t hit the airport, but if it had, it potentially could have killed hundreds of innocent civilians.

Haley’s briefing included physical evidence that Iran is providing ballistic missiles to the Houthis, Mattis said. “What we are doing in that region,” he added, “is standing by allies and partners, and we're on one hand exposing, on the other hand helping them build their own capability to reject Iranian influence.”

In addition to its support on the Arabian Peninsula to the Houthis – a Shia group seeking to take control of Yemen -- the secretary cited some of Iran’s activities elsewhere in the region.

“We find Iran actively engaged in keeping [Syrian President Bashar] Assad in power, despite the murder of his own people on the industrial scale, including the use of chemical weapons,” Mattis said. “We see what [Iran has] done with Lebanese Hezbollah in Lebanon and the threat to peace and the support they've given to Assad and the threat to Israel, for example.”

There is no military role for the United States in exposing Iran’s activities, Mattis said. “The reason Ambassador Haley was there, and not one of our generals, is this is a diplomatically led effort to expose to the world what Iran is up to,” he said.

Note: The above DoD photo of Secretary Mattis was taken by Jim Garamone.
Posted by Paul Davis at 6:31 PM