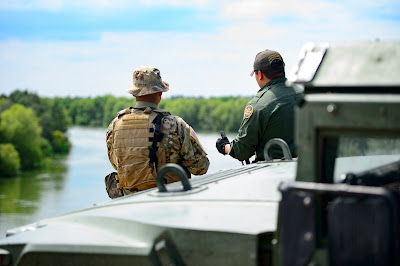 WASHINGTON, April 16, 2018 — National Guard troops are deploying to the U.S. border with Mexico to work in support functions for the Department of Homeland Security, including in aviation, operational and infrastructure missions, officials from the departments of Defense and Homeland Security told reporters here today.

The Defense Department will provide DHS with up to 4,000 National Guard troops to support the April 4 presidential memorandum authorizing the enhanced presence along the southwest border, said Robert G. Salesses, deputy assistant secretary of defense for homeland defense integration and defense support of civil authorities.

The troops will work only in operational support missions, he said, explaining their mission will not include roles in which they would interact with migrants or other people detained by DHS.

"They will not perform law enforcement functions, and they will not be placed in direct contact with personnel coming to the border," Salesses explained.

He spoke at a news conference at the Ronald Reagan Building and International Trade Center, alongside Army Lt. Gen. Daniel R. Hokanson, the vice chief of the National Guard Bureau, and Ronald D. Vitiello, the acting deputy commissioner of U.S. Customs and Border Protection.

President Donald J. Trump authorized the National Guard, with the affected governors’ approval, to enhance its support to U.S. Customs and Border Protection along the southern U.S. border. In the presidential memorandum April 4, he said a “drastic surge of illegal activity on the southern border” is threatening national security.

While noting that the number changes daily, Hokanson said his latest figures show more than 900 troops have deployed for the mission: 250 in Arizona, just over 60 in New Mexico, and around 650 in Texas.

Vitiello welcomed the enhanced presence to aid in securing the border.

"The National Guard will perform many operational support functions, including monitoring cameras and senor feeds to assist with the overall situational awareness,” he said. “They will provide much-needed aerial support, and [we] anticipate they will help with repairing roads and vehicles, among other duties.”

“Most importantly, the Guard will immediately expand our capabilities on the border, which will increase the effectiveness of our law enforcement operations,” he said.

Mattis authorized the use of Title 32 duty status and DoD funds for up to 4,000 National Guard personnel to support DHS’s southern border security mission while under the command and control of their respective governors through Sept. 30.

Title 32 status is full-time duty other than inactive duty performed by a member of the National Guard. It allows the governor, with the approval of the president or the secretary of defense, to order a member to duty for operational homeland defense activities. Arming the troops will be limited to circumstances that might require self-defense, the DoD memo says.

Note: In the above Texas National Guard photo taken by Sgt. Mark Otte a Texas National Guardsman and a Customs and a Border Protection agent discuss the border security mission on the shores of the Rio Grande River in Starr County, Texas on April 10, 2018.
Posted by Paul Davis at 7:46 PM