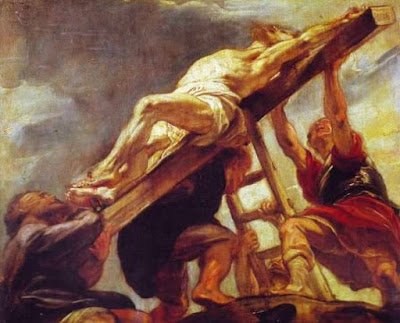 Straightaway in the morning, the chief priests held a consultation with the elders and scribes and the whole council, and bound Jesus, and carried him away, and delivered Him to Pilate.

Now at that feast, he released unto them one prisoner, whomsoever they desired. There was one named Barabbas, which lay bound with them that had made insurrection with him, who had committed murder in the insurrection. And the multitude, crying aloud, began to desire him to do as he had ever done unto them.

Pilate answered them, saying, “Will ye that I release unto you the King of the Jews?” For he knew that the chief priests had delivered Him for envy. But the chief priests moved the people, that he should rather release Barabbas unto them.

You can read the rest via the below link:


Note: The above painting was by Peter Paul Rubens.
Posted by Paul Davis at 12:31 AM

Labels: The Passion of the Christ From The Gospel of Mark, The Washington Times