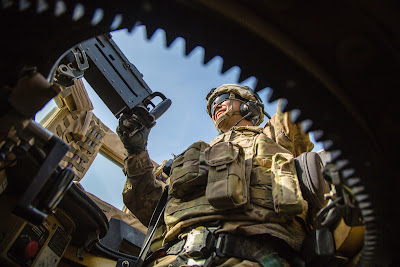 Army Col. Ryan Dillon briefed reporters at the Pentagon from Baghdad and said that SDF forces, with coalition support, “continue to look for opportunities to exploit ISIS weaknesses and conduct strikes and attacks against these remaining terrorists.”

Syrian forces are continuing to secure areas they have liberated, especially in and around Raqqa, which was the capital of the self-proclaimed ISIS caliphate. Syrian internal security forces are removing thousands of improvised explosive devices and weapons caches the terror group planted, Dillon said.

Some Territory Under ISIS Control

ISIS does continue to control some territory, the colonel said. “These are near Hajin, which is along the Euphrates River north of Al Bukamal, and in Dashisha, near the Syria-Iraq border,” he said.

In Iraq, security and stability operations continue, and Iraqi security forces continue to search for ISIS terrorists. While ISIS has gone underground in an attempt to regroup, it is still a threat in the country, Dillon said.

“The ISF know their enemy. They know that they are a threat,” he said. “And they are planning and implementing security measures with coalition support in this critical period leading up to parliamentary elections in May.”

More work remains to be done in Iraq, Dillon said, noting that ISIS is an adaptive and determined enemy. “The coalition remains focused on enhancing our Iraqi partners' capacity to sustain their operations and protect their citizens against these terrorists,” he added.

While ISIS has been expelled from most areas in eastern Syria, the terror group is changing and attacking pro-regime forces in the West.

“ISIS is starting to conduct more attacks on the west side of the Euphrates River outside of Abu Kamal against pro-regime forces,” the colonel said. “And then we've also seen … the retaking of neighborhoods in southern Damascus.

ISIS has been defeated militarily, Dillon said, but the group hasn’t given up. “Many have run … back into the desert areas and into these vast rural areas to hide and attempt to regroup,” he told reporters. “But that doesn't mean that they're exclusively just in these desert areas. Others have attempted to go back into and blend back in with population centers as well.”

This is why there is still a residual presence of the group in northern Syria, and Iraqi security forces continue to search for and arrest ISIS operatives on their territory, the colonel said.

Note: In the above U.S. Army photo taken by PFC Anthony Zendejas IV a soldier scans a sector of fire from a military fighting vehicle while escorting the United Kingdom Bridge Training Team to a bridge being built in Mosul, Iraq on March 21, 2018. The soldier, supporting Operation Inherent Resolve, is assigned to the 4th Infantry regiment’s 2nd Battalion.
Posted by Paul Davis at 4:31 AM