When The 'Bomb' Prevented A War: 1983: Reagan, Andropov, And A World On The Brink 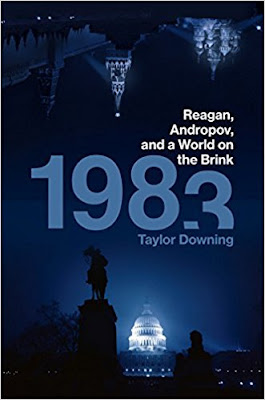 Veteran journalist and author Joseph C. Goulden offers a good review in the Washington Times of Taylor Downing's 1983: Reagan, Andropov, and a World on the Brink.
Will historians ever acknowledge that the atomic bomb, despite its horrors, stands as the most effective anti-war weapon in history?

The last worldwide conflict ended in 1945. The ensuing years, to be sure, were marred by conflicts of varying intensity — Korea and Vietnam, to name two. But for 73 years, the world has avoided a major-powers conflict of the magnitude that bloodied Europe for centuries.

The most significant stand-off of the era was the Cold War between the United States and the Soviet Union, with a mutual antipathy and exchange of threats that could have resulted in nuclear disaster.

One particularly frightening flash point came in 1983, when events on both sides caused the adversaries to veer toward a showdown that author Taylor Downing, a veteran British TV producer, likens to the 1962 Cuban missile crisis.

But there was a significant difference. The showdown over Cuba was carried out publicly, with detailed media attention as American forces were mobilized because of Soviet installation of nuclear missiles in Cuba.

But the severity of the 1983 confrontation, with several exceptions, was known only to a handful of military and intelligence officials.

Both adversaries realized that any conflict carried serious consequence. President Eisenhower’s declared policy was “massive retaliation.” Under Ronald Reagan, the catch words were “mutual assured destruction” — MAD, in defense lingo. Mr. Reagan came into office in 198l as a hard-line anti-communist. He began strengthening U.S. weapons systems. Nonetheless, he sent friendly handwritten notes to Leonid Brezhnev, who then ruled the USSR, urging the relaxation of tensions beginning with the release of political prisoners. Mr. Brezhnev sent back “an icy reply.”

Yuri Andropov, Mr. Brezhnev’s successor, had established his own tough credentials as head of the KGB. The Reagan build-up caused fears that the U.S. would use its superiority to wipe out the Soviet political leadership.

Yet despite his rhetoric, one of Mr. Reagan’s first overtures was a proposal to cut nuclear arsenals by 33 percent — a move Moscow rejected. (In retirement, Mr. Reagan would call MAD “the craziest thing I ever heard of.”)

But relations were uneasy from the start.

Communication glitches resulted in both the U.S. and the USSR receiving false (and quickly discounted) reports of incoming missiles — errors that contributed to mutual jitters. In both instances, preemptive counterstrikes were barely avoided.

Then the Soviets shot down a South Korean airliner that had strayed off course on a flight from Alaska to Seoul, killing 269 persons. The Soviets claimed to have mistaken the commercial aircraft for an American reconnaissance plane. Mr. Reagan denounced the attack as a “crime against humanity.”

As they watched Mr. Reagan’s military buildup, Soviet officers became convinced that what they called “the correlation of world forces” was turning against them. As a psychological warfare tactic, U.S. air and naval probes tested Soviet borders.

Mr. Downing contends that officials in the Reagan administration did not understand the depth of Soviet fears. He ignores a CIA analysis at the time describing Soviet leaders as “pedestrian, isolated and self-absorbed paranoid and fearful of their own people and of a world they believed [was] relentlessly hostile and threatening.” They feared a repetition of the June 1941 German invasion that almost destroyed the USSR.