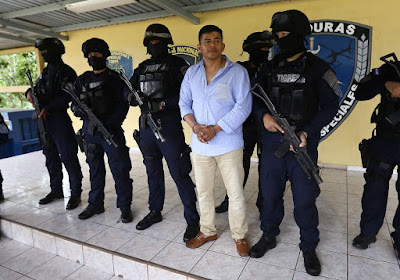 Honduran national Sergio Neftali Mejia-Duarte was sentenced today to life in prison for his involvement in a large-scale international narcotics transportation organization.

On Jan. 9, a Miami jury found Mejia-Duarte, 41, guilty of conspiring to distribute over five kilograms of cocaine with the knowledge that the cocaine would be unlawfully imported into the United States.  The evidence at trial, which included the testimony of multiple co-conspirators and pictures from a seizure of over 2,000 kilograms of cocaine, showed that defendant Mejia-Duarte led a large-scale international narcotics transportation organization based in Honduras and Guatemala that was part of a distribution chain spanning from Colombia to Mexico and the United States.  In that role, Mejia-Duarte and his workers secretly received multi-hundred kilogram quantities of cocaine from Colombia and Panama, temporarily stored the narcotics in Honduras or Guatemala, and then transported the narcotics onward, typically northward, including into Mexico.

Mejia-Duarte used go-fast boats, helicopters, and airplanes to operate his shipping route and, as witnesses detailed at trial, much of the cocaine was supplied to the Sinaloa Cartel led by Joaquin Guzman Loera, also known as “Chapo,” and Ismael Zambada, also known as “Mayo.”  Based on the witnesses’ trial testimony and documents submitted in the case, Mejia-Duarte is responsible for trafficking at least an estimated 20,000 kilograms of cocaine.  In operating his criminal network, the witnesses described how Mejia-Duarte carried guns, employed bodyguards and assassins, and engaged in a bloody war with a rival trafficker.  During Mejia-Duarte’s arrest, Honduran law enforcement officers found a Glock pistol and an automatic rifle in the closet of the bedroom where he was residing.

“Until his arrest, Sergio Neftali Mejia-Duarte was a violent and prolific drug trafficker whose criminal organization supplied cocaine to the Sinaloa Cartel, knowing full well that the poison would make its way to our streets,” said Acting Assistant Attorney General Cronan.  “Today’s sentence reflects the unwavering commitment of the Department of Justice to prosecute those who fuel our drug crisis by sending illegal narcotics across our borders.  I especially thank our law enforcement partners in Honduras and Colombia for their assistance in bringing Mejia-Duarte to justice.”

“The life sentence imposed upon Mejia-Duarte ends the reign of a ruthless drug trafficker,” said U.S. Attorney Greenberg.  “Backed by the united front of our international allies, the U.S. Attorney’s Office for the Southern District of Florida will continue to strip the drug traffickers of their power and dismantle the trafficking organizations that cross our borders and infect our communities with illicit narcotics.”

“The DEA Miami Field Division is very pleased with the deserving sentence given to Mejia-Duarte today,” said DEA Special Agent in Charge Wright.  “This adjudication is evidence of the strong partnership with our international law enforcement partners who also sacrifice much to strike down and bring to justice all those who willingly engage in dangerous and criminal acts against the United States which threatens the welfare of its citizens.”

The prosecution was part of Operation Hollow Point, which is a result of the ongoing efforts by the Organized Crime Drug Enforcement Task Force (OCDETF), a partnership between federal, state, and local law enforcement agencies.  The OCDETF mission is to identify, investigate, and prosecute high-level members of drug trafficking enterprises, bringing together the combined expertise and unique abilities of federal, state, and local law enforcement.