My Washington Times Review of 'Cold War Navy SEAL: My Story Of Che Guevara, War In The Congo, And The Communist Threat In Africa' 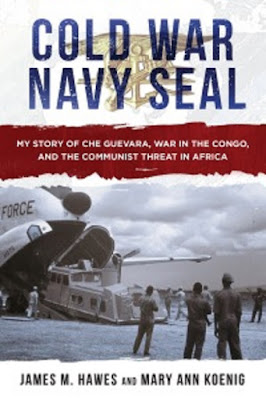 As both the U.S. and the Soviet Union had nuclear weapons, all-out war was mostly out of the question, so proxy wars were fought with surrogates backed by the superpowers.

As former Navy SEAL and CIA operator James M. Hawes notes in his book, “Cold War Navy SEAL: My Story of Che Guevara, War in the Congo, and the Communist Threat in Africa,” Africa was clearly on the Soviet Union and Communist China’s radar in 1965, and the Soviet Union’s client state, Communist Cuba, sent troops and renowned revolutionary Ernesto “Che” Guevara to the Congo to arm and train the Simba Rebels.

“This is a first-hand, ‘names and places’ account of what really happened inside a Cold War CIA program that’s been kept out of the history books. It’s the story of an American Navy SEAL who fought to aid a fledgling democracy in the Congo and stem the tide of communism in Africa,” writes “Cold War Navy SEAL” co-author Mary Ann Koenig in her introduction to the book.

“James M. Hawes built and commanded the Force Navale Congolaise, a clandestine mercenary navy at the very tip of the spear, and was point man for a successful little-known paramilitary operation.”

https://www.washingtontimes.com/news/2018/may/30/book-review-cold-war-navy-seal-by-james-m-hawes-an/
Posted by Paul Davis at 8:00 AM