Navy SEAL Receives Medal Of Honor For Afghanistan Actions In 2002 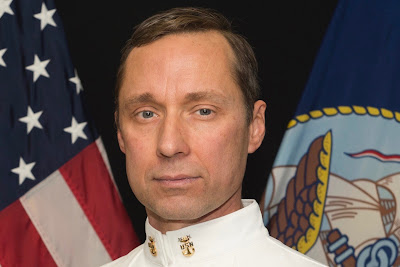 Jim Garamone at the DoD News offers the below information:

WASHINGTON, May 24, 2018 — Sitting in the White House reading the citation for the Medal of Honor doesn’t give the real flavor of why retired Navy Master Chief Petty Officer and special warfare operator Britt K. Slabinski (seen in the above and below photos) is receiving the award.

The dispassionate words on the award talk of Slabinski’s heroism in assaulting bunkers, rallying his men, and going back into the center of the firefight.

The White House is literally half a world away from a mountain in Afghanistan in 2002, where Slabinski -- and America -- lost seven good men.

He speaks in present tense, because in his mind’s eye. It is still happening.

‘I Was Just Doing My Job’

He believes he did nothing special. “I was just doing my job that day,” Slabinski said during an interview.

Slabinski -- then a senior chief petty officer -- and his men were just supposed to set up an overwatch position on the mountain to support the conventional forces in the valley below. “Now the enemy gets a vote,” he said. “We plan, we train, we rehearse and we rehearse some more for every possible contingency, but sometimes the fog and friction of war is just out of your control and a leader has to adapt.”

The team was aboard an Army MH-47 helicopter and as it was landing, well dug-in al-Qaida fighters opened up. “When we land, the ramp goes down,” he said. “I’m standing on the very back of the helicopter … and almost immediately take an RPG rocket to the side of the aircraft. It goes off, fills the aircraft full of smoke and we are getting shot up right away. There’s bullets flying through the aircraft the size of your finger [from] 12.7 machine guns that were up there.”

The pilot was able to take off, but the bird was wounded and experienced what Slabinski called “the worst turbulence you could imagine.”

Those gyrations caused Navy Petty Officer 1st Class Neil Roberts to fall off the ramp. The crew chief grabbed Roberts’ pack, and the weight of the SEAL pulled him off the ramp, too. But the crew chief was tethered into the aircraft and was able to get back in. Roberts fell 10 feet into the meter-deep snow.

“It happens that fast,” Slabinski said as he snapped his fingers.

He told the pilot that he had lost a man, but with the chopper’s hydraulics shot out, there was no way the bird could circle and retrieve him. “[The pilot] was flying a brick,” Slabinski said. “It was basically a controlled crash into the enemy-held valley.”

The master chief assessed the situation. “Now my mission originally was to support the overwatch, then my teammate Neil fell out, and now I have a downed helicopter I have to deal with,” he said. 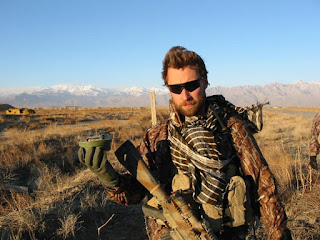 The first problem he dealt with was the helicopter, and he called in a second aircraft to take the crew and team to a safe place. Once there, Slabinski was able to focus his attention on Neil.

The information he received was Roberts was alive. “I knew there was a superior enemy force up there and they had heavier weapons than I had,” he said.

The enemy, the cold, the altitude -- “Everything that could be stacked against us, was stacked against us going back, and I had the feeling that this was a one-way trip,” he said. “I knew though, that if I go now, there’s a chance I could rescue Neil. I knew if I tried to develop a battle plan more on my terms, it would certainly be better, but I knew Neil didn’t have that time.”

The weight was on Slabinski’s shoulders. “I remember sitting in the helicopter,” he said. “The [rotors are] turning, it’s cold, trying to sort through the tactical piece of it … and this thought keeps coming back to me: If I go now what’s the cost going to be versus the cost if I wait. If you are the leader and you have peoples’ lives that you are responsible for, the decisions don’t come easy.”

The master chief assigned his men jobs, and the pilot of the first aircraft, Army Chief Warrant Officer Al Mack, went up to Slabinski and told him he would be flying them back in the new MH-47, even though he had just survived a harrowing experience with the first helicopter.

There was no other place to land, so the team had to go right back to the place the first bird took the fire. As the chopper took off, it got quiet for Slabinski and he thought of his son, who was 6 years old at the time. “I remember saying, ‘I love you. Sorry for what’s to come. Be great,’” he said. “Then I put it in another room in my brain and went on with my duties.”

This Chinook also took fire coming in to the landing area, and as soon as the ramp went down, the team went off the back of the ramp. Two men went to the right, two to the left and the master chief and Tech. Sgt. John Chapman, an Air Force combat controller, went out together.

Slabinski and Chapman were hit by a burst of automatic weapons fire. “The burst hit John and he went down,” Slabinski said. “The bullets from the same burst went through my clothes on each side, and I jumped behind a rock.”

The belt-fed weapon kept firing at them. “I looked for John and he is lying in a very odd position, and I look to my other guys and they are engaged with another dug-in position and the two to my left are engaged there. There are enemy muzzle flashes on three sides.”

There is no cover, and Slabinski tosses two grenades at the bunker, but the position is too well dug in. He looks to his men and sees Chapman still in the same odd position and the others engaging the enemy. His M60 gunner is next to me. “I have a 40mm grenade launcher … and I have six grenades,” he said. “I’m too close to the big bunker because they won’t go off. They have to spin to arm.”

He fired at the farther bunkers and silenced those, but the big bunker remains a deadly problem. He has the M60-gunner fire on the bunker and he wants to charge to the bunker to clear it under the cover of that automatic fire. Before he could do that, a grenade flies out of the bunker and explodes right in front of the barrel of the M60, wounding the gunner.

Slabinski again assesses the situation. “The gunner is down. John hasn’t moved and my other two guys are still engaged in contact,” he said. “The plan in my head isn’t working so I have to do something different.”

He decided to get his small band out of direct fire. As he is doing that another SEAL was hit in the leg from the same machine gun Slabinski was trying to take out. “I sent the wounded over first and I crawled over to John, looking for some sign of life from John and didn’t get anything,” he said.
The place he chose to seek shelter from the fire was just about 30 feet away over the side of the mountain.

Slabinski called for support from an AC-130 gunship to hit the bunkers. At the same time as the aircraft was hitting the mountain he noticed shell fragments were landing around the team. Slabinski thinks at first it is the AC-130, but it is from an enemy mortar that is ranging his position.

He moves again to a more protected area and now the U.S. Army Ranger quick reaction force is coming in. The first chopper is hit and crashes on the top of the mountain. Slabinski contacted the second bird and it lands on another spit of land and the Rangers work their way to the SEAL position and attack up the mountain to secure the top.

The master chief can’t move his wounded to the top of the mountain, so he moved to a place he could secure and await medevac, which came that night.

Estimates of the number of al-Qaida fighters on the top of that mountain range between 40 and 100. They had heavy weapons galore with automatic machine guns, mortars, RPGs and recoilless rifles. It was the headquarters for al-Qaida operating against U.S. forces engaged in Operation Anaconda. The SEAL team went in to try to rescue Roberts with six men.

Footage taken by a remotely piloted vehicle and examined later showed that Chapman was not dead. The technical sergeant regained consciousness and engaged the enemy killing two of them -- one in hand-to-hand combat. “I was 100 percent convinced that John was dead,” Slabinski said. “I never lost track of John.”

He never would have left the airman on that mountain, he said, if he thought for an instant that Chapman was alive.

For his actions that day, Slabinski received the Navy Cross, the nation’s second-highest award for valor. As part of then-Defense Secretary Ash Carter’s directive to the services to re-examine all of the valor awards beginning in 2001, the Navy recommended upgrading that award to the Medal of Honor. The master chief -- who retired from the Navy in 2014 -- received a call from President Donald J. Trump in March telling him of the decision.

The master chief is conflicted about the award. He believes he was just doing his job and still feels the loss of the seven men -- Navy, Army and Air Force -- he served with that day. “There isn’t a day that goes by that I don’t think about them,” he said. “If I could give up this medal to have them back, I would.”