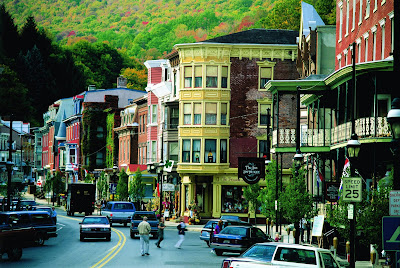 While vacationing with my wife and family in the Pocono Mountains, I met a retired Pennsylvania state trooper named Bob Barnes.

Over a couple of drinks at the bar, I told Barnes that I was a writer who covered crime. I mentioned that I was curious to know if the opioid crisis was as bad in the small Pennsylvania towns as it was in the cities.

Barnes told me that he was driving to Thorn, a small town a few miles away, to met a friend. He offered to introduce me to the Thorn police chief.

Thorn, Pennsylvania was a typical small town with perhaps untypical grand mountain scenery surrounding it. We entered the Thorn police station and Barnes introduced me to the police chief, Harry Keene, a short and solid man with short-cropped brown hair.

Barnes left and Keene took me into his private office.

Growing up in South Philly in the early 1960s I watched The Andy Griffith Show, the situation comedy centered on a small town sheriff. Sitting in the police chief's office, I felt like I was in the TV sheriff's old office, although outside of the chief's office were several officers and two civilian clerks working the phones and computers.

I asked Keene about his town's drug problems and just as we started the interview, he was called outside by one of his officers. Keene soon came back in, apologized, and said he had to leave.

He introduced me to an elderly, tall, lanky man in casual civilian attire. The chief said the man was Rocky Philips, a retired officer.

I was initially disappointed in not getting to interview the chief of police, but Rocky, I soon discovered, was a good storyteller.

"You're from Philadelphia? I knew another fella from Philly," Philips said. "But I don't think you're like him."

He then launched into a story about this other man from Philadelphia.

John Toby was a former Philly cop who married a Thorn girl, moved to the town and became a Thorn police officer in the early 1980s. When the chief retired, Toby took over, as Philips had no interest in becoming the chief and the other officers all lacked experience.

Toby wanted to be chief. A proud army Vietnam veteran who often spoke of his harrowing experiences in the war, as well as his harrowing experiences as a Philly cop, Toby was a muscular man who was loud, rude and aggressive. To Philips, it seemed like Toby had something to prove. Philips did not like the way Toby treated people and he often cautioned the chief in private about it. Toby ignored his older, more experienced officer.

Despite Toby's brusk style, most of the town's residents liked him. Some admired him. Some were amused by him. And some thought he was the worst thing to ever come to town.

Toby's wife was in the latter group. She soon tired of his abuse and left town.

Philips spoke to me of the time Toby and him broke up an argument between two high school students in the town's diner. Toby told the two boys to go outside and settle the argument by squaring off against each other.

Philips objected when he saw the face of the smaller boy, a quiet, sensitive, thin boy who was called called "Skinny" for obvious reasons. He didn't look like he wanted to fight, while the bigger boy was all for it.

Philips grabbed Toby's arm and told what he thought.

"I was a boxer in the army and the best way to settle a score is to fight it out," Toby said.

"Yeah,' Philips replied. "Maybe in a ring with boxing gloves and head gear, but not bare knuckles in a street fight."

"You work with what you got," Toby responded.

Philips thought of calling Skinny's widowed mother, but instead he walked up to the visibly shaken boy.

"You don't have to do this," Philips told the boy. "He doesn't have the authority to make you fight."

"I'd rather be beaten up than run away," Skinny said in a shaky voice. "I have to live in this town."

Skinny met Toby and the bigger boy in the street behind the diner. A crowd of students and some older town residents had gathered to watch the kids fight.

Philips walked over to Toby and pulled him aside. "Stop this now. That boy has 40 pounds on Skinny and he's taller and has a longer reach."

But Toby was adamant. He walked away from Philips without comment and grabbed the two boys. He pushed them together.

The fight did not last long.

The bigger boy punched Skinny square in the face and the slight boy fell to his knees. He did not get up.

Philips went to him and saw the boy was not truly hurt. The boy, who had never been struck in the face before, was dazed.

Philips, usually a mild and easy-going man, stood up in anger and shouted out Toby's name.

"Toby, you asshole! You pushed this poor boy into this humiliating scene with your phony tough guy bullshit."

Toby stood his ground, hands on his hips, and just smiled at Philip's outburst.

"You told everybody you were a boxer in the army," Philips said. "Well, you know what? So was I. So let's see what you got."

Although he was at least ten years older than Toby and 25 pounds lighter, Philips took off his gun holster and belt and handed them to another officer. He took off his watch and wedding ring and rolled up his sleeves.

"You're too old and scrawny for me to fight," Toby told Philips, but he looked around and saw the faces in the crowd. He didn't want to be humiliated in front of the town people, so he too removed his gun holster and belt and handled them to an officer standing near him.

Without another word Toby charged in, threw his left arm around Philips head, pulled him down and hit him in the face with an uppercut. Philips broke free and pushed Toby away.

"Are we boxing or wrestling, chief?" Philips asked. Some in the crowd laughed

Philips then stepped in and connected with a solid left jab and straight right combination that shook Toby.

Toby stepped back, but he recovered quickly. He laughed for the crowd's sake. He then moved in towards Philips and walked directly into a straight right hand that dropped him to the ground.

"I know all about you, Toby. I investigated you," Philips said as he stood over the fallen police chief. "Yeah, you served in the army, but you were nowhere near Vietnam. You served stateside. And yeah, you were a Philadelphia police officer, but not for long. You resigned just as they were gonna fire ya."

Philips blew out some air.

The crowd shifted and spoke quietly among themselves as Toby slowly and silently lifted himself up, took his gear from the officer and walked slowly to the police station.

Without a word to anyone, John Toby resigned that afternoon and moved out of town the following morning. Philips was made the acting chief until a new chief was hired.

"So what happened to Skinny?" I asked.

"Well, he turned out OK, I guess," Philips said. "He became like another son to me. I suggested he join the army when he turned 18. He did."

"Did he come back here?"

"Yeah, he did," Philips said with a smile. "You were just talking to him."