How To Vanquish Antifa's Continuing Threat 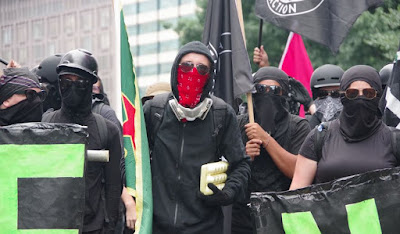 Chadwick Moore at the Washington Times offers a piece on how to combat the continuing threat of the violent protest group Antifa.


On a Saturday morning last month, two dozen masked, black-clad individuals gathered outside the entrance to Boeing’s Museum of Flight in Seattle. Their target was a 28-year-old mechanic at Boeing’s Auburn plant named Nicholas Boling. The communist agitators unfurled a 12-foot banner with Mr. Boling’s name and picture accompanied by the words, “A VIOLENT MISOGYNIST WORKS AT BOEING.”


In the weeks leading up, Antifa groups operating in the Pacific Northwest flooded Boeing’s human resources department with scripted phone calls claiming Mr. Boling was a member of a “hate group” and had assaulted a bartender (Mr. Boling denies both of these accusations). Threatening text messages from anonymous numbers inundated his phone. Parts of Seattle became papered in flyers with his photo, claiming he was a “Nazi.” Then there was the murder attempt, when someone poked holes in the brake lines of his truck and it nearly crashed.


Local law enforcement was no help. “It’s undeniable this is all because of my role as a conservative activist,” Mr. Boling says. “I go to a lot of events, I helped organized a May Day counter-protest and was involved with the Patriot Prayer.” Days after the demonstration outside Boeing, he was fired.


Last week, after an Antifa mob attempted to break into the home of Tucker Carlson, the Fox News host called the actions a concerted effort to silence dissenting opinions. “They weren’t protesting anything […] they weren’t trying to change my mind or advocate a position, they were threatening my family to get me to stop talking,” Mr. Carlson said on Fox News. “This has a chilling effect on people’s ability to speak and think freely. That’s the point. It’s totalitarian in its intent.”

https://www.washingtontimes.com/news/2018/nov/20/donald-trumps-new-attorney-general-should-eradicat/
Posted by Paul Davis at 11:55 AM