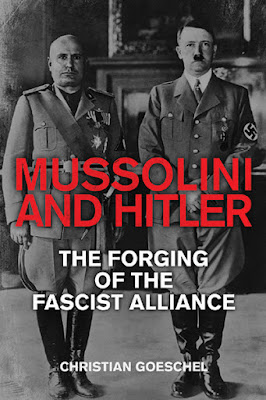 Veteran journalist and author Joseph C. Goulden offers a good review in the Washington Times of Christian Goeschel’s Mussolini and Hitler: The Forging of the Fascist Alliance.


Might we call it “the pact made in Hades?”


In the 1930s, Adolf Hitler and Benito Mussolini, tyrants who did not especially care for one another personally, signed onto a partnership that was a major step toward the war that devastated much of Europe.


Hitler wanted his southern flank protected, recognizing the ability of the Royal British Navy to land a force in Italy that could cut the legs beneath his campaign centered on France.


Mussolini had his eyes on converting much of North Africa into Italian colonies, ousting the British and French.


The “partnership” — the alliance deserves the quotation marks — was fraught with betrayal and mistrust. Many historians have depicted the duo as “vain, pompous, and jealous rivals.” Mussolini especially has been described as, a “boob” and opportunist.


Nonetheless, British historian Christian Goeschel contends, convincingly, that the partnership, despite its many flaws, was “decisive in destroying the inter-war Wilsonian order.”


At first glance, the men were ideological opposites. Hitler bullied his way to leadership with rhetoric promising to “restore” war-ruined Germany. Mussolini, a sometime editor, started as a socialist; by the time he achieved power in 1921, he cared naught for democracy.


Initial relations were restrained. Mussolini ridiculed Hitler’s putsch as a “caricature of Italian Fascism” — a backhanded acknowledgement of his power. After some early slurs, Hitler recognized Mussolini as a “tough anti-Marxist” in his book, “Mein Kampf.”