The Spy Who Was Left Behind: Russia, The United States, And The True Story Of The Betrayal And Assassination Of A CIA Agent 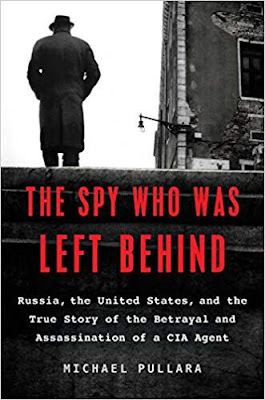 Veteran journalist and author Joseph C. Goulden offers a good review in the Washington Times of Michael Pullara’s The Spy Who Was Left Behind: Russia, the United States, and the Betrayal and assassination of a CIA Agent.


The 1993 murder was a mystery from the start. A single rifle shot to the head killed Fred Woodruff, CIA branch chief in the former Soviet Republic of Georgia, as he rode in a car on a remote mountain road.


The driver was the body guard for Eduard Shevardnadze, formerly foreign minister under Soviet President Mikhail Gorbachev. Once the USSR dissolved, he became chair of Georgia’s governing State Council.


Woodruff was in Georgia to help Shevardnadze form a protective security force. The country was suffering political and social turmoil, with crime syndicates running the equivalent of a shadow government. And the Soviets were trying to regain control of Georgia.


Author Michael Pullara, a Houston attorney, became interested in the murder because he had known the Woodruff family as a boy in the small town of Searcy, Arkansas.


Early press reports blamed the killing on a Georgian soldier, Anzor Sharmaidze, 19, who was angered when the car carrying Woodruff ignored his wave for help with his own broken-down car.


Although Sharmaidze claimed he was tortured into falsely confessing, a judge found him guilty and sentenced him to six years in prison.


A veteran trial lawyer, Mr. Pullara doubted that the full truth was told. The military had fuzzed the truth about the death of his father In Vietnam, thus he was no stranger to official fibbing.


He wanted to know more. As he writes, “I wondered what I can do with a law license, a passport and a credit card.” Thus began an odyssey for the truth that consumed almost 20 years.

https://www.washingtontimes.com/news/2018/nov/7/book-review-the-spy-who-was-left-behind-by-michael/
Posted by Paul Davis at 8:58 AM