"I Can't Breathe": South Philly Columbus Statue In A Box 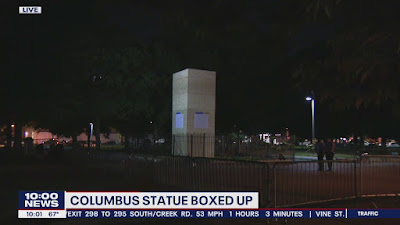 Veteran reporter Ralph Cipriano at BigTrial.net offers a piece on the Columbus Statue in South Philadelphia.

After city workers got through boarding up the 20-foot high Christopher Columbus statue at Marconi Plaza, the city solicitor signed a stipulation yesterday that will prevent trigger-happy Mayor Jim Kenney from toppling the marble monument in the middle of the night, like he did with the Frank Rizzo statue.


The stipulation was signed by City Solicitor Marcel Pratt, and George Bochetto, the attorney for the South Philly residents who went to court Sunday night seeking an emergency injunction to protect the Columbus statue from the city and Kenney.


At 12:37 p.m. today, Common Pleas Court Judge Paula Patrick signed the stipulation, which became the judge's order. And "any violation of the terms . . . will be contempt of court, and punishable in the same fashion as an injunction order," Bochetto wrote to his clients.


The order calls for the Philadelphia Art Commission to hold a public process "to determine the possible removal" of the Columbus statue. "Consistent with its prior plan, the City presently has no intention to and will not remove, damage, or alter the Statue, until such time as the Art Commission determines whether it should be removed, or, if sooner, upon Court Order," the order states.

In the meantime, "The city will reasonably protect the Statue pending a decision by the Art Commission," the order states.

"Accordingly, the City has constructed a wooden box that encompasses the entirety of the Statue. At the request of Plaintiff's Counsel, the City will negotiate in good faith with Plaintiff's Counsel in developing a plan within the next ten days to possibly modify the boxing apparatus.

"After the city boxed up Columbus, photos were circulated around South Philly statue saying, "I can't breathe."

Bochetto wants to alter the wooden box. "It is my intention to get a Plexiglass panel to show the top of the statute," Bochetto wrote his clients.

The city posted a message at the base of the wooden box saying that the Columbus statue "has been a source of controversy in Philadelphia and across our country."

"Many are calling for the removal of the statue," the message reads. "The City understands their concerns," and, "We are committed to listening to all and moving forward in the best way to heal our deep divides."

"The boxing is to preserve the statue while the Art Commission process is followed. No decision has been made on whether the City will remove the statue."

… On Tuesday, Fumo went on Facebook to denounce Kenney as a "small-minded immature fat baby" who is so "insecure the only way he thinks he makes himself big is to punish South Philadelphia where he came from."

In his Facebook post, Fumo blamed Kenney for "vindictively and as a punishment" transferring Captain Louis Campione, commander of the 1st Police District out of South Philly after Campione acted to quell tensions in Marconi Plaza by ejecting a so-called "reporter" for Unicorn Riot who the captain said was "inciting a riot." 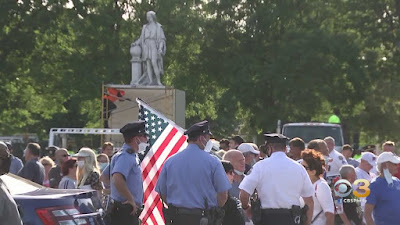