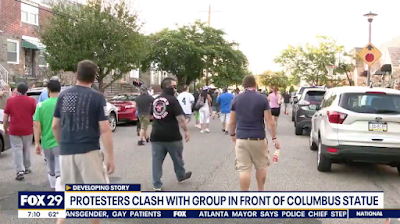 Veteran reporter Ralph Cipriano offers his take on the Philly DA’s reaction to South Philly people protecting their neighborhoods and the statute of Christopher Columbus at Bigtrial net. He also covers the transfer of a popular South Philly police captain.


In the upside-down world of District Attorney Larry Krasner, he's working to free most of the 2,000 looters and demonstrators arrested by cops during the protests.


But Krasner has already indicted one cop for allegedly using excessive force during the protests, and he's looking to indict a few more. And yesterday, the Progressive D.A. announced plans for targeting a new type of criminal for prosecution -- "vigilantes."


In a memo to cops announcing new "Procedures for Misdemeanor Arrests," the district attorney's office outlined how to arrest and charge alleged vigilantes for using bats, golf clubs and hatchets to menace peaceful protesters.


"Bats and golf clubs are criminal when used to menace/threaten," the D.A.'s office wrote in the memo. "A baseball bat in a park where the pandemic has banned sports, there's no ball field, and they're being handed out of garbage bags . . . is not manifestly appropriate."


This is rich coming from Krasner whose office has routinely freed armed and dangerous drug dealers, a two-time murderer, and a guy who strangled his girlfriend. Under Krasner, while the D.A. is now out hunting vigilantes, he's turned a blind eye to protesters who were arrested after throwing rocks, bottles filled with urine, and tennis balls filled with cement at the cops.

In the memo, the D.A. tells cops that vigilantes brandishing bats and golf clubs can be arrested for possession of an instrument of crime. And if they actually use those weapons to hurt somebody, they can also be charged with simple assault.


… Speaking of the alleged vigilantism at Marconi Plaza, the police response while mediating the standoff down there between protesters and "vigilantes" has resulted in the transfer of Captain Lou Campione, the commanding officer of the First Police District.


What did Campione do to merit a transfer that many say is a demotion?


On Twitter, Unicorn Riot, ran a video of the captain telling a Unicorn Riot "reporter" to take a hike.


"I'm giving you three warnings to disperse," the captain told the reporter on the video. "It's a volatile situation."


"You're inciting a riot," the captain responds, to which the reporter finally says, after a second warning from the captain, that he'll leave.


… Cops were upset about the transfer of Captain Campione.


"The police department is always talking about community based policing," one cop said. "Well you just removed the captain who does the most of that out of all the commanders."


Sekou Kinebrew, a spokesperson for the department, could not shed any light on the reason for the transfer of Captain Campione.


"Captain Campione's change in command was one of several command changes that took place yesterday," he wrote in an email, but he declined any further comment.


On social media, South Philly residents were advertising a rally at 4:30 p.m. at Broad and Oregon Avenue on behalf of the captain.


"We are very, very sad to report that our beloved police captain, Louis Campione, has been transferred to the northern-most outpost in the city  [Far, Far Northeast]," the post said. "This is ad pitiful, vindictive move on the part of the mayor and police commissioner due to one complaint from an Antifa."


"After 42 years of impeccable service to the residents of this city, this decision is an absolute disgrace and must be reversed 'effective immediately.' Now!"


The post said that the captain works 80-hour weeks and "Captain Lou is the epitome of 'community policing,'" the post said. "As you know, Captain Campion never misses a meeting, phone call, an event, a funeral, a family crisis, an accident or a community event. We need to show him our full support and demand that the mayor and police commissioner reverse this retaliatory demotion."