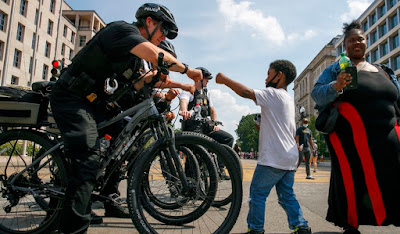 David Sherfinski and S.A. Miller at the Washington Times offers a piece on a study that shows most people trust and support the police.


Calls to defund the police because of brutality and racism don’t match the experiences of most Americans when they call law enforcement for help, according to the most recent comprehensive national data collected by the Justice Department.


The overwhelming share of U.S. residents who in the past several years initiated contact with the police to request assistance said they were satisfied with the interaction, and a clear majority said the police improved the situation.


Among the millions of people who call police for help, whether for a mental health crisis, domestic violence incident or other emergency, an estimated 83% said they were satisfied with the police response and 59% said the police improved the situation, according to the Bureau of Justice Statistics’ Police-Public Contact Survey.

https://www.washingtontimes.com/news/2020/jun/9/police-responses-satisfy-most-americans-despite-de/
Posted by Paul Davis at 11:41 AM