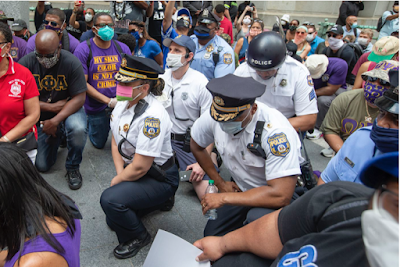 Veteran reporter Ralph Cipriano (seen in the bottom photo) at www.bigtrial.net asks whether the Philadelphia police commissioner violated policy by “taking a knee" with protestors?


Earlier this month outside City Hall, Police Commissioner Danielle Outlaw knelt in solidarity with protesters angry about the murder of George Floyd in police custody.


To the protesters, it may have come across as a conciliatory stance, but in taking a knee, along with Deputy Commissioner Melvin Singleton,  Commissioner Outlaw appears to have violated the Philadelphia Police Department's written directives for handling demonstrations and labor disputes.


According to the Police Department's Policy Directive 8.3, Section E, "Police personnel of all ranks shall maintain complete neutrality and objectivity at all times." Section G further states, "Under no circumstances shall the department be made subservient to any group."


How much more subservient can you be if you're taking a knee?


"The directive was not violated," Kinebrew wrote back in an email.


So I sent Kinebrew pictures of Outlaw kneeling and wearing what appears to be a salmon pink and apple green-colored facemark.That's the official colors of the Alpha Kappa Alpha sorority, which is listed on Outlaw's resume. I asked Kinebrew if wearing those colors amounted to taking a side in the dispute between protesters and the police.


I asked Kinebrew if he was telling me that I wasn't seeing what I saw in the photos I sent him.


"No disrespect," he wrote back, "But I'm done commenting on this."


Other cops had different opinions.


"In other words, directives don't apply to the top brass," one cop wrote. "What would happen if a cop took a knee at a KKK rally?"


"How dare they take a knee for an organization that clearly chanted, what do we want, dead cops, when do we want it, now," another cop wrote. "I will never bow to those who disrespect the badge."


"It makes the department look weak," the cop said. "I was sick to my stomach when I saw that happen," she said about the kneeling. "Strength comes from standing your ground, not pandering like a fool."


I asked a black cop if he would take a knee for the protesters.


And from a tactical point, the cop said, "the worst position you can be in is on the ground." If the demonstrators rushed the cops while they were kneeling, they could have grabbed an officer's gun, or his Taser, the cop said.


"Me and me alone" ordered the tear gas, Wilson confessed, so he was taking a voluntary demotion down to chief inspector.


To many cops, the ritual humiliation of Wilson was hard to stomach.


"Translation," wrote one veteran Philadelphia Police Department commander in an email, "I am blaming this on that white Republican asshole Dennis Wilson to skirt any and all responsibility."


"Well, 'Commissioner,' if you weren't hiding in the comfort of your office while the rest of us on the street were getting our asses kicked by the 'peaceful' protesters who were rioting, looting, burglarizing, stealing, vandalizing, taking over the Expressways, committing arson, assaulting police officers, and the list goes on, maybe you would have actually been there, on the front lines, as is expected of a leader, so you could have called the shots," the veteran police commander wrote.


In her email to police headquarters, Outlaw also announced that an officer assigned to the SWAT team who was filmed using pepper spray on three civilians sitting on the ground had been given formal notice of a 30-day suspension, with intent to dismiss.


"Translation," the veteran police commander wrote. "We are going to lock up his white male Republican ass to cater to Black Lives Matter and the mob."


Outlaw was taking a pounding in other quarters. On the latest episode of the Philly Prime podcast, Dave Schratwieser of Fox 29 interviewed former famous Philly cops Michael Chitwood Sr. and Michael Chitwood Jr., who between them have 85 years of police experience.


Schratwieser asked both Chitwoods about their reaction to the Philly riots.


"I've never seen anything like it in my life," said Chitwood Sr., the retired police superintendent of Upper Darby, and before that, a highly decorated Philadelphia police officer.


"Philadelphia was not prepared for the violence that occurred," Chitwood Sr. said.


"What I saw was a complete lack of leadership in Philadelphia from the mayor and the police commissioner and somebody has to own that," said Chitwood Jr. He's currently the sheriff of Volusia County, Florida, and the former police chief of Daytona Beach. Before that, Chitwood Jr. was a decorated lieutenant in the Philadelphia Police Department.


As far as the mayor owning "a complete lack of leadership," fat chance. All Jim "Sanctuary City" Kenney knows how to do is pander and apologize. And hide behind the skirt of his rookie police commissioner.


"I think the commissioner should have been out there in front leading and if the order had to be given, she should have given the order," Mike Chitwood Sr.said. 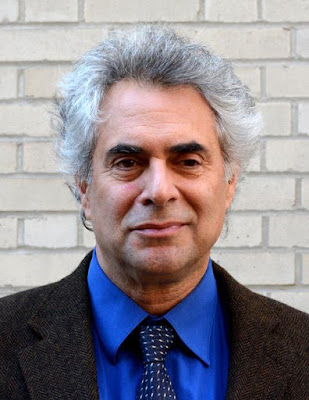