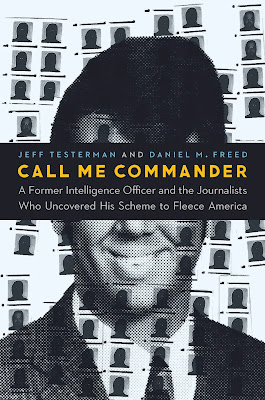 The Washington Times ran my On Crime column on Call Me Commander.

As a Navy veteran, I was interested in Commander Bobby Thompson, a crook who operated a fraudulent Navy veterans’ charity. His crime story is covered in Jeff Testerman and Daniel Freed’s most interesting book, “Call Me Commander: A Former Intelligence Officer and the Journalists Who Uncovered His Scheme to Fleece America.”

I reached out to co-author Jeff Testerman and asked him about Bobby Thompson.

“Bobby Thompson is the identity stolen by John Donald Cody as he relocated to Tampa in 1997 and set up the elaborate hoax known as the United States Navy Veterans Association. For the next decade, Cody called himself “Commander Bobby Thompson,” and claimed he was the director of the 66,000-member veterans’ charity which used telemarketing companies to bring in tens of millions of dollars from unsuspecting donors,” Jeff Testerman replied.

“Cody succeeded in his scam for years, in part, because he was highly educated, trained in military and intelligence matters and adept in the art of persuasion. Cody joined the ROTC at the University of Virginia, where he was a star on the debating team. He then earned a law degree at Harvard and was promoted to captain in the U.S. Army Intelligence corps. He also had connections to the CIA before launching a successful law practice in Sierra Vista, Arizona, where he is remembered as the smartest guy in town. Cody believed he could persuade anyone of anything, and most of the time, he was right.”

Cody ingratiated himself with politicians from the local mayor to the president of the United States with hefty campaign contributions and promises of support from his supposedly huge veterans’ membership.

“He filed dozens and dozens of tax returns for his charity and its state chapters, all falsified, but sufficient to pass muster from an overworked and undermanned IRS,” Mr. Testerman explained. “And, if anyone had questions about the history, membership or good works of the Commander’s charity, all they had to do was dial up his website, an intricate 2,500-page site that included just enough truth to keep hesitant donors or skeptical regulators guessing.”

Jeff Testerman was working on a St. Petersburg Times story about a Tampa city councilman who claimed to have an exemplary Navy career but served only for five weeks. He discovered the councilman had received a $500 contribution from a group that he had never heard of.

“I thought I would seek out an official of this veteran’s group and seek a quote or two about donating to a politician who had lied about his Navy career. Lo and behold, a director of the charity, Commander Bobby Thompson, lived a 15-minute drive from the newspaper office,” Mr. Testerman said.

“I drove out to see him. And here is where a newspaperman’s instinct kicked in. Nothing seemed right. Thompson was living in a dilapidated duplex. He had had a couple of beers by 10 in the morning when I showed up. And he was downright hostile to the sudden appearance of a man he knew from reading the papers was an investigative reporter.”

After months of research, the newspaper published a series on the dubious charity and Thompson disappeared.