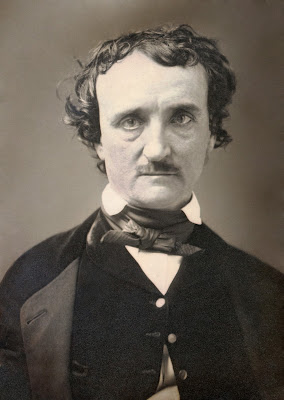 I interviewed Scott Peeples (seen in the below photo), author of Man in the Crowd: Edgar Allan Poe and the City. 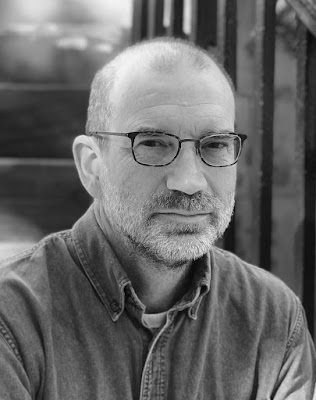 You can read the column via the pages below (click on them to enlarge), the below link, or the below text: 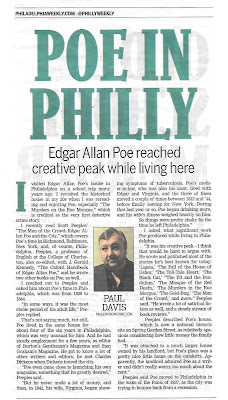 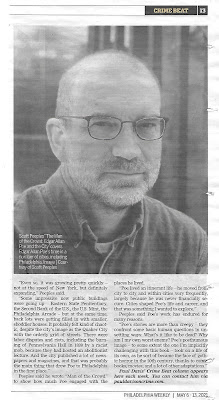 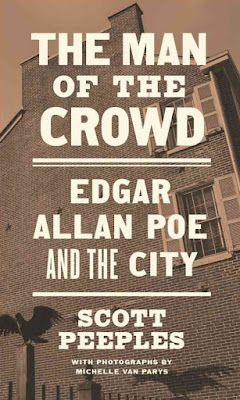 Edgar Allan Poe Had Creative Peak While Living in Philly

I visited Edgar Allan Poe’s house in Philadelphia on a school trip many years ago. I revisited the historical house in my twenties when I was rereading and enjoying Poe, especially “The Murders on the Rue Morgue,” which is credited as the very first detective crime story.

I recently read Scott Peeples’ “The Man of the Crowd: Edgar Allan Poe and the City,” which covers Poe’s time in Richmond, Baltimore, New York, and of course Philadelphia. Scott Peeples, a professor of English at the College of Charleston, also co-edited, with J. Gerald Kennedy, “The Oxford Handbook of Edgar Allan Poe,” and he wrote two other books on Poe as well.

I reached out to Peeples and asked him about Poe’s time in Philadelphia, which was from 1838 to 1844.

“In some ways, it was the most stable period of his adult life,” Peeples replied.” That’s not saying much, but still, Poe lived in the same house for about four of the six years in Philadelphia, which was very unusual for him. And he had steady employment for a few years, as editor of Burton’s Gentleman’s Magazine and then Graham’s Magazine. He got to know a lot of other writers and editors; he met Charles Dickens when Dickens toured the city.

“Poe even came close to launching his own magazine, something that he greatly desired. But he never made a lot of money, and then in 1842 his wife Virginia began showing symptoms of tuberculosis. Poe’s mother-in-law, who was also his aunt, lived with Edgar and Virginia, and the three of them moved a couple of times between 1842 and ’44, before finally leaving for New York. During that last year or so Poe began drinking more, and his wife’s illness weighed heavily on him. So things were pretty shaky by the time he left Philadelphia.”

I asked what significant work Poe produced while living in Philadelphia.

“It was his creative peak --- I think that would be hard to argue with. He wrote and published most of the stories he’s best known for today: “Ligeia,” “The Fall of the House of Usher,” “The Tell-Tale Heart,” “The Black Cat,” “The Pit and the Pendulum,” “The Masque of the Red Death,” “The Murders in the Rue Morgue,” “The Gold-Bug,” “The Man of the Crowd,” and more,” Peeples said. “He wrote a lot of satirical fiction as well, and a steady stream of book reviews.”

Peeples described Poe’s house, which is now the National Historic Site on Spring Garden Street, as relatively spacious considering how little money the family had.

“It was attached to a much larger house owned by his landlord, but Poe’s place was a pretty nice little home on the outskirts. Apparently, the landlord admired Poe as a writer and didn’t really worry too much about the rent.”

Peeples said Poe moved to Philadelphia in the wake of the Panic of 1837, as the city was trying to bounce back from a recession.

“Even so, it was growing pretty quickly --- not at the speed of New York, but definitely expanding,” Peeples said. “Some impressive new public buildings were going up --- Eastern State Penitentiary, the Second Bank of the US, the US Mint, the Philadelphia Arcade --- but at the same time back lots were getting filled in with smaller, shoddier houses. It probably felt kind of chaotic, despite the city’s image as the Quaker City with the orderly grid of streets.  There were labor disputes and riots, including the burning of Pennsylvania Hall in 1838 by a racist mob, because they had hosted an abolitionist lecture. And the city published a lot of newspapers and magazines, and that was probably the main thing that drew Poe to Philadelphia in the first place.”

Peeples said he wrote “Man of the Crowd” to show how much Poe engaged with the places he lived.

“Poe lived an itinerant life --- he moved from city to city and within cities very frequently, largely because he was never financially secure. Cities shaped Poe’s life and career, and that was something I wanted to explore.”

Peeples said Poe’s work has endured for many reasons.

“Poe’s stories are more than creepy --- they confront some basic human questions in unsettling ways: what’s it like to be dead? why am I my own worst enemy? Poe’s posthumous image --- to some extent the one I’m implicitly challenging with this book --- took on a life of its own, as he sort of became the face of gothic horror in the twentieth century, thanks to comic books, movies, and a lot of other adaptations.”

Paul Davis’ Crime Beat column appears here each week. You can contact him via pauldavisoncrime.com.