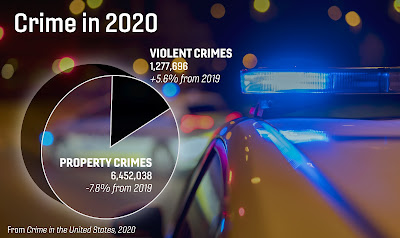 The FBI released the crime statistics for 20202.

For the first time in four years, the estimated number of violent crimes in the nation increased when compared with the previous year’s statistics, according to FBI figures released today. In 2020, violent crime was up 5.6 percent from the 2019 number. Property crimes dropped 7.8 percent, marking the 18th consecutive year the collective estimates for these offenses declined.

The 2020 statistics show the estimated rate of violent crime was 387.8 offenses per 100,000 inhabitants, and the estimated rate of property crime was 1,958.2 offenses per 100,000 inhabitants. The violent crime rate rose 5.2 percent when compared with the 2019 rate; the property crime rate declined 8.1 percent.