My Crime Fiction: "What's In A Nickname?" 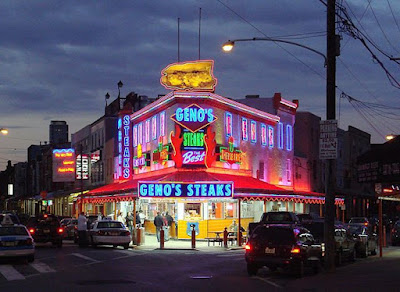 What’s in a Nickname?

I’ve always enjoyed comedians, as I love a good laugh.

I recall back in the late 1970s, when I was young, single and happy, and my friend Buster Stracci and I were barhopping in South Philadelphia on a Friday night. With Buster’s car squeezed into a tight parking space, a rare find on a Friday night in South Philly, we were walking around and breezing in and out of local bars.

On the way from one bar to another, I saw a storefront that advertised a comedy club. I suggested to Buster that we check it out. We went in. It was a small place, with a small, elevated stage, a short bar, and about a dozen tables and chairs crowed together.

Buster sat down and ordered drinks, as I looked for the men’s room.

I saw a thin, goofy looking guy with glasses and unruly hair standing near the stage and I asked him where the men’s room was. He pointed to the door behind him. I opened the door and saw two young girls combing their hair. I closed the door and in anger I grabbed the goofy guy’s arm.

“What are you, a comedian?” I yelled as he cringed and looked as if he was about to faint.

I heard the MC on the stage get on the mic and begin to introduce the first act, so I forgot about the goof and washing my hands in the men's room and sat down next to Buster.

To my surprise, the first act was the goofy looking guy.

Buster began to laugh loudly. He slapped me on the back and said, “You asked him if he was a comedian – and he is!”

The goofy looking guy on stage said, “I must be a good comedian, as I’m getting laughs before I even speak.”

He was wrong. He was not a good comedian. And that initial laugh from Buster was the best one he received during his entire act. The next comedian, thankfully, was much better.

Later, I discovered that the small club only had one restroom, which both men and women used, and those two girls hadn’t locked the door while they were in there.

Some years later, after I married my beautiful wife Dolores, she and I would go to the comedy clubs, as she enjoyed the comedians as much as I did.

On one Saturday night, Dolores and I, accompanied by Mark Terranova and his wife Diane, visited “Nicky’s Number One.” The club was located up the street from “Geno’s Steaks,” the famous cheesesteak place that the tourists frequent in South Philadelphia.

Having heard that the club was featuring comedians as well as musical acts, my friend Mark, a retired Philadelphia detective, suggested that we take our wives there.

The club was called “Nicky’s Number One,” as it had been Nicodemo Esposito’s first club when he first entered the nightclub business some years back. Esposito was nicknamed “Nicky Number One,” as the story goes, as he had been a record promoter in the 1960s when the expression “number one with a bullet” meant a song was rising to the top of the Billboard record charts.

The nickname also came from Esposito being a long-time soldier in the local mob, and for a time, back in the day, he had been the number one guy to call when the boss wanted to put a bullet in someone.

Nicknames are big in South Philly.

Either you are called the diminutive of your Christian name, as in “Paulie” for Paul, or you are given a nickname due to a characteristic of your physical looks or personality. While some nicknames are complimentary, many are not flattering, and those tagged with a moniker often do not care for it. But if the nickname is apt and sticks, it will be how you’re known for life.

Terranova and I and our wives enjoyed the comedy act, which featured Albert “Cheat Sheet Al” Stevens. He was a stocky guy with an oversized head that was prematurely bald, and he had an irritating, high pitch voice. We laughed at most of his jokes, but in my view, he was not that original or innovative a comedian.

Terranova knew Stevens from the neighborhood and prior to seeing his act, he told me the guy was hilarious when he was a kid.

His stage nickname was derived from one of his gags. When a joke of his would bomb, he would pull out his “cheat sheet,” look at it, and then tell the audience that he was right, and they were wrong for not laughing. He did this gag several times during his act.

I had seen that gag before, so it was not original.

After the show, Mark Terranova took us all to the bar to meet Stevens. He introduced us all and told Stevens that I was a columnist for the local paper.

He shook my hand enthusiastically.

“Are you working tonight?” he asked with a wide grin.

“No. I write a crime column, not an entertainment one.”

He dropped my hand as the grin disappeared and he turned quickly to Terranova, dismissing me as I wasn’t able to promote his act. I felt the urge to smack his big head.

I listened as Stevens told Terranova how he had changed his stage name to “Cheat Sheet Al,” which helped him attract comedy gigs and fans. He said he gone to Hollywood and made a TV pilot, called – you guessed it - “Cheat Sheet Al.” The pilot was not picked up by the network.

“I went for the brass ring,” he told Terranova. “But I couldn't grab it.”

Stevens said he was thankful that Nicky Esposito had offered him a job, as he was tired of being on the road and he liked working back home in South Philly.

Stevens hugged Terranova, nodded to our wives, and left the bar. We grabbed our coats and headed out the door.

As we walked out the door, we stopped and shook hands with Nicodemo Esposito, a short, grim elderly man in a suit and tie

“Nick, you old hoodlum. How are you?” Terranova asked Esposito in good humor.

We all laughed as we left the club.

The following week I heard that Stevens had been murdered and Esposito had been charged with the homicide. I called Terranova and asked him if he heard anything.

Terranova called me back a few hours later and told me what the detectives on the case were saying.

The detectives on the case told Terranova that Esposito had become increasing deaf in his old age, so he didn’t much listen to the acts in his club. He was also becoming increasingly paranoid, and, apparently, he didn’t know that a cheat sheet was a small piece of paper with notes that one used to cheat on tests, or to aid a public speaker, or, as in the case of Al Stevens, simply a small sheet he used as a prop in his act.

The detectives discovered that after Stevens’ act, the comedian and some friends and fans were drinking at the bar with Esposito nearby. According to the bartender, Joe Abramo, Esposito, despite his hearing loss, kept hearing the comedian being called “Cheat Sheet Al.”

Abramo told detectives that Esposito had a few drinks too many, and he took offense at the men at the bar calling the comedian “Cheat Sheet Al.” .

“Is he bragging about cheating me?” Esposito asked Abramo.

"I'm not so sure," Esposito said. "I remember when everyone crowded around me and listened to my stories."

"They still do, boss," Abramo said.

"In those days, no one would dream of cheating me," Esposito said. "And now here's this joker who has the balls to even call himself a cheat, joking and bragging about being a crummy, cheating bastard."

The bartender told detectives that Esposito downed a shot of whisky, pulled his .32 semi-automatic from his waistband and walked over to Stevens.

“So, you think you can get away with cheating me, ya bum?”

The crowd saw the gun, and knowing Esposito’s reputation, they slid away fast. Stevens couldn’t move, as Esposito had pushed him against the bar.

“Nick, what are you talking about, man. I would never steal from you, please.” Stevens pleaded.

“You won’t steal from me again.”

Nicky Number One fired a round into Cheat Sheet Al’s chest.

The comedian fell to the floor.

Esposito left the club calmly and walked over to Geno’s, where he ordered a cheesesteak and a coffee. He was sitting at an outside table when the police arrived and arrested him.

As it turned out, Stevens' nickname, the one he thought helped his career, had in fact ended it.

In my column that appeared in the local paper after the shooting, I noted that William Shakespeare had written “What’s in a name?” in his famous play, “Romeo and Juliet.”

In South Philly, one can ask, what’s in a nickname?