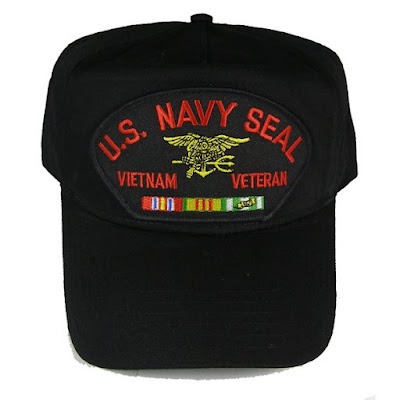 The below short story first appeared in American Crime Magazine.

After I completed my most recent crime column for the local paper, which was about a fraud who posed as a former Navy SEAL in order to received unearned Veteran’s Administration benefits, I thought back to other frauds I knew who lied about being in the military and serving in combat.

I thought of Tony Russo, an odd guy that I knew from a local taproom in South Philadelphia. One of the other guys told us, half-jokingly, that Russo's mother had dropped him on his head when he was a baby.

I didn’t think Russo was a bad guy, just a bit weird and socially awkward. That is until he began telling the guys in the bar, and probably everyone else, that he was a Vietnam veteran.

I knew that Russo, who was a few years older than me, had certainly not served in the Vietnam War. I knew, because like most veterans, we had discussed what we had done in the service more than once in the bar.

I told Russo that I had served as a sailor on the USS Kitty Hawk as the aircraft carrier performed combat operations on "Yankee Station" in the Gulf of Tonkin off the coast of North Vietnam in 1970 and 1971. Russo told me that he was an MP (military police) in West Germany during the early 1960s, before the big build-up in South Vietnam.

Being an MP in West Germany was honorable service and something to be proud of, but in his twisted mind, I suppose it was not enough.

Previously, I had interviewed him for my newspaper column when he joined the Vietnam Veterans of America. I quoted him as stating that although he was not a Vietnam veteran, he respected those who did serve there.

Then, only a few years later, he got it into his head that he had served in the Vietnam War, just as the veterans he hung around did. He claimed to have won a Purple Heart and other medals in the war. Some gullible guys who first met him bought him drinks and sandwiches, which he accepted. This, I knew, was a crime, although the cost of a beer and a sandwich perhaps made it a minor crime.

As I noted in my newspaper column, under the Stolen Valor Act of 2013, it is a crime to obtain money, property, or other tangible benefits while fraudulently claiming to have been awarded the Congressional Medal of Honor, the Distinguished Service Cross, the Navy Cross, the Air Force Cross, a Silver Star, a Purple Heart, and other combat medals.

I thought that his lying about serving in Vietnam was a despicable act, and an insult to those who actually served in the war. It was Stolen Valor. But I didn’t bother to expose him at the bar, or call the FBI, because I believed he had mental issues. And most of the guys at the bar didn't believe him in any case.

I recall one time when he was telling his phony war stories in his usual stammer with awkward pauses, when he stated, “I spent eight months in, hey ya, Hell.”

“Don’t all guys spend a full year in-country tour?” One of the bar’s patrons asked.

Russo had a strained look on his face, and then said, “I left because I had high blood pressure.”

“Didn’t everyone in Vietnam have high blood pressure?” I asked.

My thoughts then drifted to another time back in the late 1970s when I was a young man.

I had gone to a jewelry store to pick up a watch that needed to be repaired. At the entrance to the jewelry store were two unarmed black security guards. They both wore black paramilitary uniforms. One of the guards was a big guy and his black uniform shirt was stretched as his upper torso bulged with muscle. He also wore a black baseball cap that read “Navy SEAL Vietnam Veteran” embroidered above the bill.

The second guard, a smaller, thinner, and older black man, wore a simple black baseball cap and his black uniform hung loose on his lean frame.

The bigger of the guards stood in front of me and looked me over. He was twice the size of me, but having been an amateur middleweight boxer, I was not intimidated.

I stared up at the big man and looked him in the eye.

The thinner guard nudged his bigger partner aside and said, “C’mon in, man.”

“Thanks,” I replied and walked over to the counter.

A pretty young black girl was behind the counter. I smiled, said hello, and handed her my slip. She smiled back and walked towards the back room, once looking over her shoulder and smiling again at me.

“What you looking at, pretty boy?”

I turned and saw space mountain standing next to me. My flirtatious good humor vanished, and I responded like a good son of South Philly.

“That girl there is my girl. And you don’t want to fuck with me, boy, I’m a Vietnam veteran.

“I was a fucking Navy SEAL in the shit. What was you?”

“I was on an aircraft carrier.”

“Pussy,” he said curtly. “This here jewelry store hired me because I fought in Vietnam as a SEAL and won the Silver Star in combat.”

My bullshit antenna raised. I didn’t believe him.

“Go back to the circus, Bozo.”

“Are you calling me a clown? I’ll rip your head off!”

“Or die trying,’ I said, my right fist balled and ready.

Bozo ripped his shirt open, struggled to get it off, and then tossed it with a fury to the floor.

“Come outside, Motherfucker, and I’ll fuck you up.”

He yanked the store’s door open and stepped out, and I followed.

Bozo stood on the sidewalk, flexing his muscles.

I wasn’t impressed, as I knew that steroid-induced muscles made one strong, but not fast.

The second security guard came out and stood between us.

“Man, there ain’t no need for violence.”

“Get out the way, Harry, I’m going to fuck this pretty boy up.”

With that he came at with a slow, clumsy roundhouse.

One did not need to be a former boxer to slip that telegraphed punch. I leaned my head back and turned it slightly to the right and felt the air of the missed punch sail by.

I countered quickly with a hard right cross and Bozo dropped to the cement. He lay there holding his head and moaning and rolling from side to side.

The pretty counter girl came out of the store and stood over Bozo.

“Please don’t hit him again!” She pleaded. “He wasn’t a Navy SEAL. He wasn’t even in the service.”

She handed me my repaired watch in a bag, and I handed her a $20 dollar bill, which gave her a $5 dollar tip. I turned and walked away.

Harry rushed up to me.

“Thank you, man.” He said. “I’ve been listening to his shit for almost a year. He’s always putting me down as I was a Marine in Nam, even though I was shot and almost died. He always saying SEALs is tougher than Marines.”

“Well,” I said to Harry. “Thank you for your service.”