Remembering 9/11: Events 20 Years Ago Moved Many to Serve In The FBI 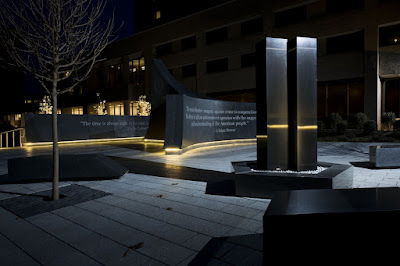 The FBI offers a piece on how the horrific 9/11 terrorist attack led many Americans to join the FBI.

In the moments after the country was attacked on September 11, 2001—before the largest-ever FBI investigation took shape and evidence response teams deployed, even before heroic first-responders were seen heading to plane crash sites in New York, Pennsylvania, and Virginia—many people across the country felt a profound new calling to help and to serve.

“I can vividly remember the moment and then the days and weeks following September 11, and I immediately knew that I wanted to be part of preventing that ever happening again,” said Brandon, a forensic DNA expert at the FBI Laboratory, who was in college 20 years ago when terrorists crashed four planes and killed nearly 3,000 people. “What September 11 did for me was it gave me that new direction.”

As she watched wall-to-wall news coverage during the immediate aftermath of the attacks, 14-year-old Carrie, who today is an intelligence analyst in the FBI’s Counterterrorism Division, said that all she wanted to do at the time was go to the attack site in New York and help. “It really was like, ‘I want to do something. I want to help. I want to go to Ground Zero and help them,’” Carrie recalled in a recent interview. “But everyone’s telling you, ‘You can’t. You’re too young. You don’t understand.’ And you’re like, ‘I do understand. I do know what’s going on. And I want to help.’”

You can read the rest of the piece and listen to audio accounts via the below link: