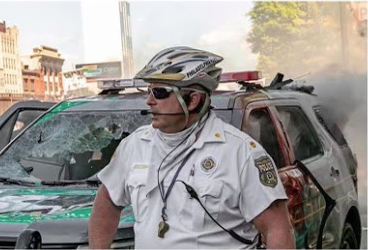 On June 1, 2020, Gorski was one of approximately, 1,500 protesters who were headed eastbound on the Benjamin Franklin Parkway toward Interstate 676. As the leader of the city police's vastly outnumbered bike patrol, Staff Inspector Bologna's assignment was to keep the protesters from posing an imminent danger to themselves and to motorists by illegally shutting down I-676 traffic during rush hour.

As the judge admitted, the scene on the Parkway that day last summer was "mayhem." Protesters were throwing rocks and frozen water bottles and spraying urine at the cops. When Gorski attempted to interfere with another cop who was attempting to arrest another protester, Bologna swung his baton at Gorski, striking a backpack on Gorksi's left shoulder. As Bologna pinned Gorski on the ground and placed him under arrest, a woman can be heard on the video repeatedly screaming "Fuck you" at Bologna.

The D.A. had claimed that Bologna's baton had struck Gorski in the head, causing a blow that required a dozen staples to close. But a slow-motion replay of the video clearly showed that Bologna's baton struck Gorski's backpack on his left shoulder. That's why in Municipal Court last January, Judge Henry Lewandowski threw out all the charges that cop-hating D.A. Larry Krasner had filed against Bologna.

But Krasner refiled the charges against Bologna. And so in Judge Bryant-Powell's courtroom today, the D.A. got lucky. As Bologna's wife and fellow cops watched in dismay, a rookie judge behaved as though she was a TV rules analyst at a football game. She did it by going under the hood and replaying the cell phone video of the protest a total of at least nine times in the courtroom, and many more times in chambers, before she finally emerged to give her expert analysis.