The U.S. Ground War In Afghanistan Is Over. Now It’s The Navy’s Turn: Expect Aircraft Carriers To Stay In The Middle East, U.S. officials Say, Even As The Military Tries To Pivot To China 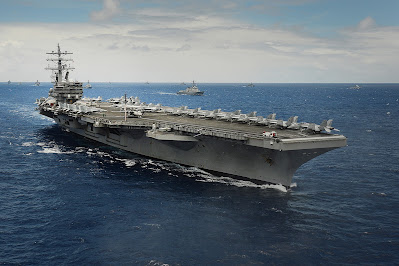 Paul McLeary at POLITICO offers a piece on the U.S. Navy’s role in the Middle East after the American withdrawal from Afghanistan.

The American military’s involvement in Afghanistan could soon become largely the Navy’s responsibility, an ironic twist for a counterterrorism mission in a landlocked country.

Although the Navy has long privately bristled at the requirement to deploy one or even two aircraft carriers at a time to the Arabian Sea and Persian Gulf to support the ground fights in Afghanistan, Iraq and Syria, the lack of U.S.-controlled airfields near Afghanistan could mean more planes taking off from decks at sea.

And that could set off a fresh round of requests for more funding — and more hand-wringing among those who want the U.S. military to focus more on China.

“I think a lot of that mission is going to fall on the Navy,” said a Navy official who requested to speak on the condition of anonymity because the Pentagon’s plans have yet to be finalized. “This is a great example of why we need more money to operate forward — things like this are what we’re built to do, but we need the funding and support to keep doing it, and that hasn’t always been there.”

Worried about the reemergence of ISIS-K, or an emboldened al Qaeda in Afghanistan, the Biden administration has pledged to continue to launch “over the horizon” airstrikes from drones and manned aircraft. But it has yet to detail a plan for how those aircraft will collect intelligence on targets, or conduct sustained missions from such great distances.

The U.S. ground war in Afghanistan is over. Now it’s the Navy’s turn. - POLITICO