General Milley Says Civil War In Afghanistan ‘Likely’ After US Withdrawal, Could Lead To 'Reconstitution Of Al Qaeda' 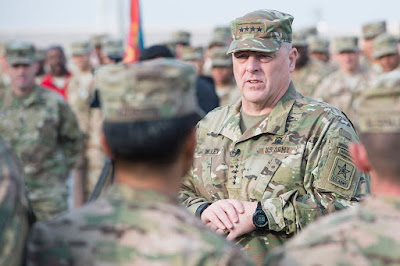 She asked the general about the military operation to process 17,000 Afghan evacuees headed for the U.S.

"What they're doing as people come in, they're getting their names registered. They're doing the biometrics. They check their irises. They do their fingerprints. They take a full facial photo," he explained, referencing not only the Department of Homeland Security but officials in the FBI, USAID, the State Department, and Customs and Border Protection.

… The general was asked whether the U.S. is safer following the complete withdrawal from Afghanistan but said it was too soon to tell.

"My military estimate is…that the conditions are likely to develop of a civil war," Milley said.  "I don't know if the Taliban is going to [be] able to consolidate power and establish governance."

The general’s premonition was followed by his concern that the terrorist organizations could use the disorder in Afghanistan as an opportunity to find gains.

"I think there's at least a very good probability of a broader civil war and that will then, in turn, lead to conditions that could, in fact, lead to a reconstitution of al-Qaeda or a growth of ISIS or other myriad of terrorist groups," he told Fox News.

"You could see a resurgence of terrorism coming out of that general region within 12, 24, 36 months. And we're going to monitor that," he added.

The general emphasized that maintaining U.S. security and intelligence gathering in the region will be a more difficult task now that the U.S. has no official presence inside Afghanistan.

"We'll have to reestablish some human intelligence networks, etc.," he said. "And then as opportunities present themselves, we'll have to continue to conduct strike operations if there's a threat to the United States."

Milley says civil war in Afghanistan ‘likely’ after US withdrawal, could lead to 'reconstitution of al Qaeda' | Fox News