‘Dr. No’ Launched James Bond With A Bang 59 Years Ago 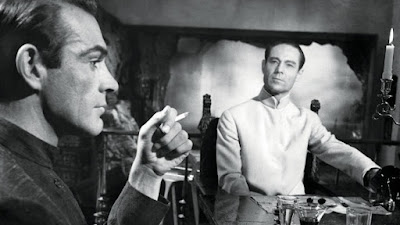 The Hollywood Reporter offers a piece on the first James Bond film, Dr. No.

When No Time to Die debuts in the U.S. at last on Oct. 8, after several years of creative and pandemic-related delays, it will mark the 27th film in the James Bond franchise. It also marks the final appearance of Daniel Craig in the starring role of 007, the debonair superspy originated by Sean Connery in the very first Bond film, 1962’s Dr. No.

Believe it or not, that one had trouble getting a green light. American producer Albert R. “Cubby” Broccoli and his Canadian counterpart Harry Saltzman had joined forces, rather uneasily, to bring Ian Fleming’s best-selling creation to life. Most studios found the material too British and too sexual, but United Artists chief Arthur Krim offered them a modest budget of $1 million ($10 million today) to make their little adventure film.

‘Dr. No’ Launched ‘James Bond’ With a Bang 59 Years Ago – The Hollywood Reporter