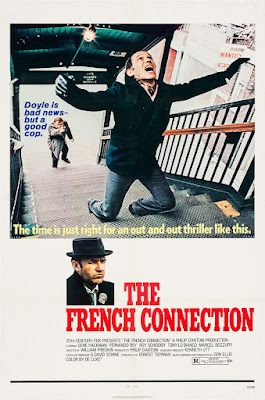 The classic crime film The French Connection is celebrating its 50 anniversary this year.
I was a 19-year-old sailor serving on the aircraft carrier USS Kitty Hawk off the coast of North Vietnam during the Vietnam War in 1971 when I first read Robin Moore’s true crime book, The French Connection.

As a South Philly street kid and aspiring writer who longed to cover crime as a reporter and write crime fiction after I left the Navy, the book truly inspired me.

Robin Moore’s The French Connection detailed the thrilling true story of two New York City narcotics detectives who led an investigation that uncovered the largest drug bust at the time.

I reread the book just prior to watching the film adaptation in a San Diego movie theater. The film, like the Moore book it was based on, was truly inspirational. I imagined myself shadowing detectives like those in the film on the mean streets of Philly as a reporter. I loved the gritty, realistic crime film, and over the years, I’ve watched The French Connection time and time again.

Thankfully, I did go on to write crime short stories and I've become a crime reporter and newspaper columnist. Covering crime, I’ve gone out on drug busts and ride-alongs in Philadelphia with narcotics officers, detectives, and patrol officers.

And I’ve also interviewed legendary NYPD detective Randy Jurgensen, who today is the last surviving “French Connection” cop. Like the two lead detectives who uncovered the case, Eddie Egan and Sonny Grosso, Jurgensen acted in The French Connection film and served as a consultant and advisor to the director, William Friedkin.