My Crime Beat Column: 'No Time To Die' - Bond, Bullets, And Nanobots 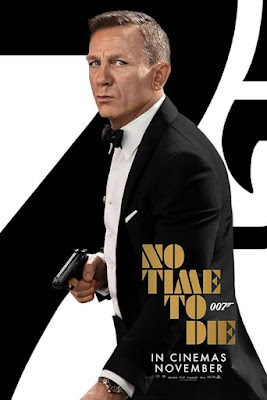 I ventured out last week to see the latest James Bond film, No Time To Die (perhaps it should have been called No Time To Think of a Better Title).

I haven’t been to a movie theater in years, preferring to watch films on TV at home even before COVID 19, but I wanted to see this film on the big screen, even though I fully expected to hate it.

Instead, I came away with a mixed review of the film.

As I’ve noted here before, I became an Ian Fleming aficionado when I bought and read all of the Bond novels as a teenager in the early 1960s after seeing Sean Connery as Bond in the first two Bond films, Dr. No and From Russia With Love.

Reading the Fleming novels, I was surprised and pleased that the thrillers were darker, more complicated, and more interesting than the films.

I did not initially like the selection of actor Daniel Craig for James Bond in 2006’s Casino Royale, as he did not fit Fleming’s physical description, but I was glad that the producers had returned to making true thrillers rather than the silly, action-comedies of the past. Craig is a fine actor, I admit, and he handles the action and fight scenes well.

The five-film Daniel Craig arc now ends with No Time To Die.

There are no spoilers here.

But I have to say that I was not fond of the film’s convoluted sci-fi plot, and I yearn for the good old days of robbing Fort Knox, nuclear blackmail and biological warfare that were the high-end crimes featured in Fleming’s novels and the Bond films of the 1960s.

No Time To Die kicks off with a good opening scene in which a young girl is being attacked by a solo gunman in a broken Japanese mask. It was clever and well done.

Next, we find that James Bond has retired from Her Majesty’s Secret Service and is living in Jamaica (where in fact the character was born, as Ian Fleming wrote the Bond novels at his Jamaican villa, Goldeneye).

Bond meets his old friend and CIA ally Felix Leiter, who recruits him to help recover a kidnapped scientist (what, the CIA does not have any paramilitary operators on their payroll?).

The mission leads to Cuba, where Bond, in his proverbial black tux, is aided in a gun fight with countless men by a woman who claims to have had only three weeks training - and yet fights like a veteran U.S. Navy SEAL.

Bond is unable to rescue the scientist, who turns out to be duplicitous and escapes from Bond and company with deadly nanobots technology.

Back at SIS headquarters in London, more commonly known as MI6, the SIS gang is all there, with Ralph Fiennes as M, Naomie Harris as Moneypenny. Ben Whishaw as Q, and Rory Kinnear as Tanner. There is also a newcomer, Lashana Lynch as Nomi, the operator who assumed the 007 codename after Bond retired.

I like that the SIS is holding Bond’s arch-enemy, Spectre's founder and leader, Ernst Stavro Blofeld (portrayed by Christoph Waltz) in a Hannibal Lector-style prison. I like the idea that Blofeld manages to control outside criminal events from his supposedly secure, high-tech prison.

I would have liked to have seen Blofeld as the primary and solo mastermind villain, and done away entirely with Rami Malek’s character, a creepy little guy named Lyutsifer Safin.

One mad, disfigured villain is quite enough for one film, thank you.

I didn’t mind the romance of Bond and Madeleine Swann, or even Craig appropriating Bond actor George Lazenby’s line from On Her Majesty’s Secret Service, “We have all the time in the world,” - but I didn’t think Lea Seydoux was a strong enough actress to pull off the role.

I liked that the film also used the late, great Bond composer and conductor John Barry’s We Have All the Time in the World song, sung by the late, great Louie Armstrong, as well as other songs from On Her Majesty’s Secret Service, but I do tire of the endless self-referencing the Bond films appear to love.

The highlights of the film are the splendid and exciting actions sequences that were so well done. The money was up there on the screen, as the late Bond producer Albert R. Broccoli used to say.

But on the downside, the film was far too long.

And lastly, I didn’t care for the film’s ending, which I won’t divulge here.

I suspect the producers will come back in two years’ time and once again reboot the Bond series, as they did in 2006 with Craig in Casino Royale.

I’d like to see Aidan Turner (seen in the below photo) get the role of James Bond, as he fits Ian Fleming’s physical description, and he is a fine young actor. 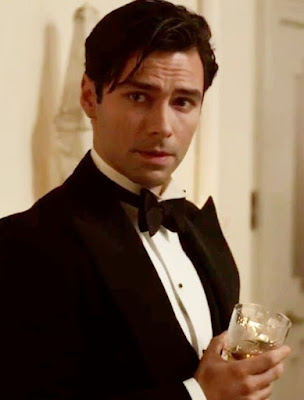 I liked Turner in Poldark, and I especially liked him in And Then There Were None.

He was very good as a cold, tough, tux-wearing killer. The part was practically an audition for Bond – and Turner nailed it in my view.

As No Time To Die notes in the film's end credits – James Bond will return.