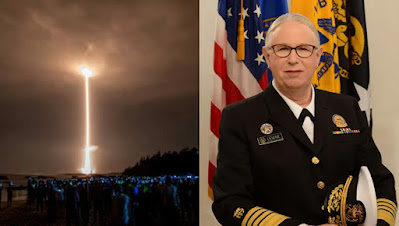 The Babylon Bee mocks President Biden and Dr. Levine in a clever and amusing piece:

WORLD—The arms race is heating up between the U.S. and China. Just last week, China revealed its brand new "space nukes", which are capable of easily nuking any country on the planet. The United States responded swiftly to the provocation by unveiling the world's first trans admiral.

"China, you've been warned," said Biden to a Chinese food delivery person he mistook for President Xi. "Our transgender admiral is fully armed and operational. If you cross us, we will unleash the full fire and fury of this deadly weapon upon you, make no mistake."

Military experts say that while a space nuke is somewhat impressive, it pales in comparison to the awesome power of diversity. "With Rachel Levine serving as admiral, nations around the world will bow before the terrifying might of our transgender empowerment," said General Milley. "We must pursue peace through strength. Strength of inclusivity."

Biden insisted that there is no weapon yet conceived that can top Admiral Levine and that he will gladly accept China's preemptive surrender.

Admiral Levine was not available for comment as she was getting her prostate examined.

A Serious Note: Dr. Levine, a pediatrician, was commissioned an admiral in the U.S. Public Health Service, not the U.S. Navy. It takes somewhat longer to become a four-star admiral in the Navy.