The Finest Life You Ever Saw: Another Look At Hemingway's Life, Art And His Boat 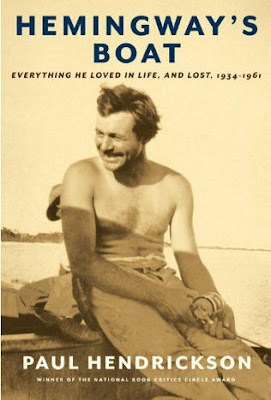 James Salter at the New York Review of Books offers a review of Paul Hendrickson's Hemingway's Boat: Everything He Loved in Life, and Lost, 1934-1961.

Ernest Hemingway, the second oldest of six children, was born in Oak Park, Illinois, in 1899 and lived until 1961, thus representing the first half of the twentieth century. He more than represented it, he embodied it. He was a national and international hero, and his life was mythic. Though none of his novels is set in his own country—they take place in France, Spain, Italy, or in the sea between Cuba and Key West—he is a quintessentially American writer and a fiercely moral one.

Howell Raines at the Washington Post also offers a review of Hemingway's Boat.

While reading “Hemingway’s Boat,” it occurred to me that serious students of Ernest Hemingway have been like passengers in another vessel, the metaphorical boat invoked by his friend and rival F. Scott Fitzgerald in “The Great Gatsby.” As readers, we have been beating against a ceaseless current of posthumously published novels, biographies, family memoirs, psychoanalytic studies and polarized critical debates about Hemingway’s oeuvre and character. Now thanks to Paul Hendrickson, we can rest on our oars for a while.