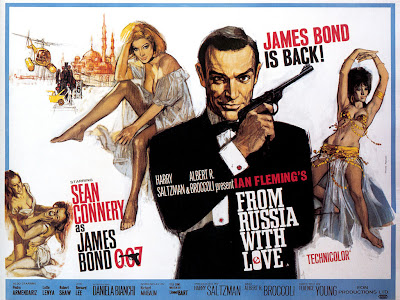 I agree with four of his picks.

The Manchurian Candidate is another great spy film. Based on Richard Condon's great novel, the film offers Frank Sinatra in one of his finest film roles and his fight scene with Henry Silva comes close to matching Sean Connery and Robert Shaw's fight in From Russia With Love. Angela Lansbury, Laurence Harvey and James Harvey are terrific in this clever film of a brain-washed Korean War who returns home as a political assassin.

I also like The Ipcress Spy and The Spy Who Came in From the Cold.

But I would not have picked Three Days of the Condor. The idea of the CIA killing their own officers in New York is absurd. The film is a paranoid fantasy. I've spoken to several CIA officers who just hate this film.

My fifth pick would have been The Hunt for Red October (based on the Tom Clancy novel) or The Fourth Protocol (based on the Fredrick Forsyth novel).
Posted by Paul Davis at 5:54 PM