My Crime Beat Column: Goodfellas Don't Sue Goodfellas, A Look Back At Organized Crime And The Philly Mob 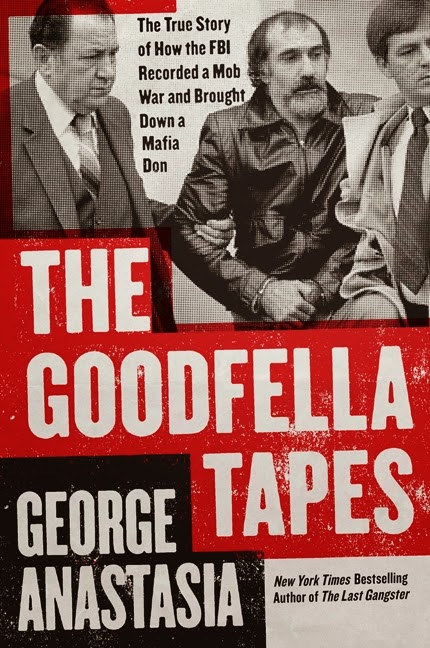 Bonanno was often sited with being the model for the Vito Corleone character in The Godfather novel and the subsequent trilogy of films.

Like Bonanno, Corleone had a “Joe College” son who reluctantly joined his father in the organized crime business. Like Bonanno, Corleone took on the other crime families in New York, although Bonnano, unlike Corleone, lost and was exiled to Arizona (where law enforcement officials have always maintained he continued to be involved in crime activities).

Bonanno, like Vito Corleone in the novel and the movies, died of natural causes. Unlike most mob bosses in fact and in fiction, Bonanno did not die in prison or in a hail of bullets.

The Godfather, although highly romanticized, is a fine fictionalized study of organized crime’s history in America. Nearly all of the major events in the Mario Puzo novel and Francis Ford Coppola’s film trilogy were based on real events in crime history.

Puzo admitted that he never knew any mob guys other than gamblers and he said he based his novel entirely on research. It is perhaps a testimony to Puzo’s skill as a novelist that real mob guys never truly believed that. Many of them believed he had a highly placed mob source.

Over the years I've heard from a number of law enforcement officials who complain that The Godfather and the other mob books and movies glamorize crime.

When I was a producer and on-air host on Inside Government, a public affairs radio program that aired on WPEN AM and WMGK FM on Sunday mornings a few years ago in the Philadelphia area, I interviewed Robert Courtney, the chief of the U.S. Attorney's Organized Crime Task Force.

He did not agree with my assessment of Goodfellas, which I said was the most realistic film portrayal of organized crime. Courtney felt that audiences liked the actor Joe Pesci in the film because he was funny and charming, but failed to realize that he and the other criminals in the film were vicious and murderous.

I didn't disagree that the criminals in the film were vicious and murderous - director Martin Scorsese certainly showed that in the gritty and realistic movie - but I noted that I’ve found some of the real mob guys to be funny, charming and even generous.

And I’ve also seen them quickly turn vicious, cold and heartless – just as Joe Pesci and Robert De Niro portrayed them on the screen. They can be good friends and good company - unless you owe them money or you have something they want. Serial killers and con artists have also been known to be quite charming.

From The Godfather to The Sopranos, novels, movies and TV programs have often presented the gangster as a tragic, romantic and even sympathetic figure. Told from the criminal’s point of view, these stories are how the gangsters see themselves. Readers and viewers often sympathize with the human qualities of the characters, but they should always remember these characters are murderers.

Criminals are interesting, which is why most of us watch the movies and read the books, but they are not admirable.

Being part Italian and born and raised in a predominately Italian-American neighborhood in South Philly - the hub of the Philadelphia-South Jersey mob - I was well aware of organized crime at an early age. I lived just around the corner from the home of the long-time Philadelphia mob boss, Angelo Bruno. He was killed in front of that very same home in 1980, sparking a two-decade leadership struggle that would result in many more murders.

I also lived near Richard Zappile, the former Philadelphia chief of detectives who fought the mob and went on to become the first deputy police commissioner. Yes, Virginia, there are Italian-Americans involved in organized crime, but there are also many Italian-Americans on the other side of the law as well.

In my late teens and 20s, I was a regular at the clubs and bars owned and frequented by mob guys. Many of my childhood friends went on to dapple in the rackets, and as a writer I went on to cover organized crime. I knew the funny, violent and tragic characters that populate Mean Streets, Goodfellas and other crime films.

Based on Nicholas Pileggi’s true crime book Wiseguy, the film chronicles Henry Hill’s low-level life of crime. Hill would end up as a witness against his mob mentors in crime, one of whom was James “Jimmy the Gent” Burke, the leader of a crew that carried out the robbery of the Lufthansa Air Cargo Terminal at Kennedy Airport in 1978. Millions of dollars were stolen and more than a dozen of the perpetrators were later murdered by Burke.

Mean Streets is Scorsese’s earlier crime film that dealt with young mob guys in the old New York neighborhood. The film is an artful and accurate portrayal of what George Anastasia, the veteran Philadelphia Inquirer crime reporter, called the “dark side” of Italian-American life.

A few years ago, I went to hear Anastasia, who had just published an account of the Philadelphia organized crime family in his book The Goodfella Tapes: The True Story of How the FBI Recorded a  Mob War and Brought Down a Mafia Don.

The book is about how the FBI secretly recorded an internecine mob war and brought down the local crime boss, John Stanfa.

Anastasia made an appearance at Borders bookstore in Center City Philadelphia. He read passages from his book and fielded questions from the crowd of about 30 people.

Like his two previous outstanding books on the Philly mob, Blood and Honor and Mobfather, South Philadelphia is featured so prominently in The Goodfella Tapes that it’s practically a character.

“The Philadelphia mob is probably the most dysfunctional crime family in America,” I recall Anastasia saying. “It’s kind of  The Simpsons of the underworld.”

How it got that way, he said, is what the book is all about.

Anastasia talked about the 1993-95 mob war in and around South Philadelphia, noting that one failed hit man used the wrong size shells in a shotgun (which was right out of Jimmy Breslin’s comic novel The Gang That Couldn't Shoot Straight) and how another mob guy called off a hit because he had to report to his parole officer.

Anastasia explained that one side was old world Sicilian and the other side was born and bred South Philadelphians, the offspring of the previous mob leadership.

And the Feds got it all down on tape.

A minor gambling investigation led to the bugging of a law office in New Jersey, where the mob guys met secretly (and they thought safely) to discuss mob gossip, philosophy and tactics. Over the course of two years, the FBI recorded 2,000 conversations.

The book offers a good number of other insightful comments as well.

Anastasia said he became interested in organized crime having been born in South Philly and the fact that his grandfather came from Sicily. “I was fascinated because it’s the dark side of the Italian-American experience,” Anastasia said.

He began covering crime when he was assigned by the Inquirer to cover Atlantic City at the time of the gambling referendum in 1976. There was much talk about keeping the mob out, but as Anastasia noted, they were already there. He later covered more and more mob-related stories.

I asked him how he responded to criticism from Italians that his extensive coverage of the “dark side” as he put it, offered a negative image of Italians, the vast majority of whom were not criminals.

“These guys are taking the positive values of the Italian-American experience; honor, family and loyalty and bastardizing them for their own end. I think you should shine a light on that,” he said.

On the other hand, Anastasia said he took great pride in the positive contributions that Italians have made to this country and to the world.

Scorsese offered an interesting side note to his crime films in his Playboy interview.

Scorsese said that Henry Hill told him that he once convinced his friend’s father to go and see a certain movie. The father, Paul Vario, a capo in the Lucchese crime family, never went to the movies, but agreed to see Mean Streets at Hill’s urging.

Vario, who would years later be portrayed by Paul Sorvino in Scorsese’s film Goodfellas, liked Mean Streets so much that he instructed his entire crew to go and see it.

“It’s about us,” Vario said succinctly.


Note: The above Crime Beat column originally appeared in the Orchard Press Online Mystery Magazine in 2002.
Posted by Paul Davis at 3:03 AM