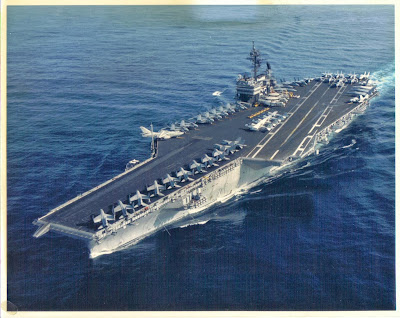 Having served as a young sailor on the aircraft carrier USS Kitty Hawk during the Vietnam War, I'm prone to agree with Robert O'Brien's essessment that carriers remain essential to America's national security.

No navy in the world can put to sea a ship comparable to the 100,000-ton-displacement Stennis or its 10 sister carriers, which are powered by two nuclear reactors, carry 85 aircraft and are crewed by 5,400 sailors and aviators when their air wings are embarked. It is for this reason that in a crisis, the first question asked by an American president is, “Where are the carriers?”

It is the reason that our ally the Philippines welcomed the Stennis and its escorts into the neighborhood last month as a counterweight to the region’s assertive superpower, China. It is the reason our commanders in Afghanistan and Iraq can send soldiers and marines into desolate and hostile environments. They rely on fighters launched from the Stennis to deliver ordinance, on demand, to support their missions. These carrier-based aircraft do not require bases in the war zone or in nearby fickle allied nations.

It’s why China has been developing anti-access and sea-denial strategies to deter the United States from sending its carriers into the Western Pacific.

You can read the rest of Robert O'Brien's piece in The Daily Caller via the below link:

Note: The above U.S. Navy photo shows the USS Kitty Hawk at sea.
Posted by Paul Davis at 7:19 PM