My Crime Beat Column: The Terrorist In Fact And Fiction 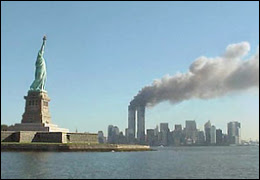 
The terrorist has long been a staple villain in fiction. From Ian Fleming to Tom Clancy, the terrorist in thrillers has been portrayed as a criminal out to extort money, a religious fanatic doing the work of God (as he sees it in his deluded mind), or a former soldier seeking revenge for some perceived slight.


In Money, Money, Money, Ed McBain’s Middle Eastern character arrives at an American airport and he is deeply offended at being profiled as a terrorist - even though he is one.

McBain’s crime novel, involving money laundering and international terrorism, was published two days before the 9/11 terrorist attack on the World Trade Center and the Pentagon.

Ed McBain, a.k.a. Evan Hunter, said he was on a book promotion tour in Chicago when he heard the news of the attack. He noted the eerie similarity between his novel and the real unfolding events.

Since 9/11, the stock bad guy terrorist in fiction and action movies has become a very real villain and a very real threat.

America’s war on terrorism may have begun in earnest following the September 11th attacks, but the terrorist's war against America and the Western democracies can be traced back to 1968.

Plane hijackings, kidnappings, car bombs and other acts of terrorism plagued the capitols of Europe throughout the 1970s and right on into the new century. Europeans have long lived under the gun (and the bomb) of Middle-East terrorists, as well as the IRA, organized crime, separatist movements and a variety of left- and right-wing terrorist groups. These groups considered embassies, hotel lobbies, sports arenas, airport lounges and sidewalk cafes free-fire combat zones.

I lived in Europe for two years in the early 1970s while serving in the U.S. Navy and I saw how life could be affected by the fear of terrorism. I talked to a good number of Britons, Italians, Germans, Spaniards and other Europeans in train stations, restaurants and bars as I traveled throughout Europe. I recall that nearly all of them expressed a deep fear of terrorism following every news account of a car bombing or assassination in London, Paris or Stockholm. Terrorism was not an abstraction to them. It was a very real threat to their well-being.

I was in Belfast during the Christmas season and I was saddened to see this war-torn city with British troops in full combat gear on street corners.

While I was there a bomb was detonated at a store and several innocents were killed.

I recall being glad that we didn’t see terrorist attacks on American soil. I also reflected on America’s good fortune to have fought all our modern wars on foreign shores.

Previous to 9/11, terrorists mostly targeted our military people at overseas posts, from the Marine barracks in Beirut to the USS Cole in Yemen. They also targeted Americans traveling abroad on foreign airlines and cruise ships.

Of course, since 9/11, that’s all changed now. The terrorists have brought the war home in a big way.

The terrorists have brought the war to our shores and like the Europeans, we now must live with the threat of terrorism. 9/11 was perhaps America’s worst disaster, but the acts of heroism and humanity that followed the attack lead me to believe that we have the resolve to win the war on terrorism.

Note: The above FBI.gov photo shows the Statute of Liberty and beyond it the World Trade Center on fire on 9/11.
Posted by Paul Davis at 6:59 PM

Labels: 10th anniversary of 9/11, My Crime Beat column, The Terrorist in Fact and Fiction