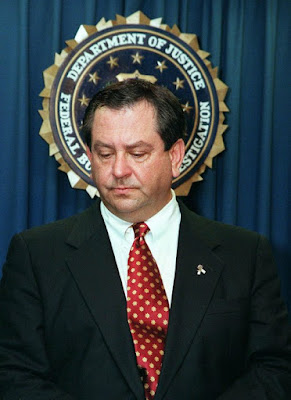 Mark Moore at the New York Post offers a piece on former FBI official James Kallstrom (seen in the above photo), who believes that Andrew McCabe should not have been named acting director of the FBI. (I agree).

Former top FBI official James Kallstrom said on Sunday that it’s “disgraceful” that Andrew McCabe is the acting director of the agency despite his wife’s cozy relationship to Hillary Clinton operatives.

“It’s actually disgraceful,” Kallstrom, the former assistant director of the FBI, told John Catsimatidis on his “Cats Roundtable” radio program. “Here’s a guy who’s still in the chain of command.”

She also received $207,788 from the Virginia Democratic Party, which is heavily influenced by Clinton loyalist McAuliffe.

The funds began flowing to Jill McCabe two months after the FBI launched its investigation into Clinton’s use of a private email server in July 2015.

At that time, Andrew McCabe was promoted from running the bureau’s Washington field office to the No. 3 position at the FBI. She eventually lost to her GOP opponent.

“And Comey lets all this pass. He doesn’t do a thing about it. It’s an outrage,” Kallstrom said. “Today’s he’s the acting director and I hope in two or three days he’s no longer the acting director because he has no judgment. And it just shows that Comey has no common sense.”

Note: I'd like to see President Trump appoint Ray Kelly, the former NYPD Commissioner, to the top FBI job.
Posted by Paul Davis at 5:36 PM