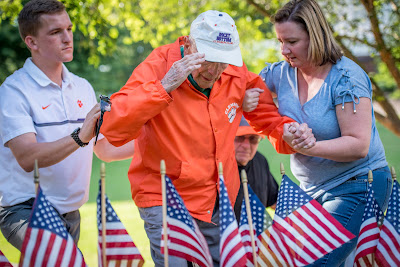 The U.S. Army released the above photo of retired Army Col. Ben Skardon, 99, a survivor of the Bataan Death March, as he salutes Henry Leitner’s headstone in Clemson University’s Scroll of Honor during a flag-placing ceremony in preparation for Memorial Day observances on May 25, 2017.

Leitner and Skardon, both Clemson alumni, survived the infamous Bataan Death March and were prisoners of war together.

The above photo was taken by Army Reserve by Staff Sgt. Ken Scar.

You can click on the photo to enlarge.
Posted by Paul Davis at 6:39 AM