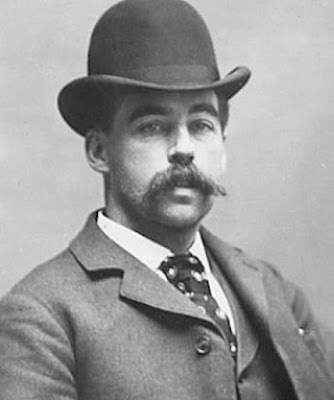 The body of serial killer H.H. Holmes will be exhumed to prove to all that he is truly dead, according to a report at usnews.com.

PHILADELPHIA (AP) — The body of a 19th century serial killer is being exhumed in suburban Philadelphia at the request of his great-grandchildren, who hope identifying his remains will quell centuries-old rumors that he conned his way out of his execution and escaped from prison.

A Delaware County judge gave the go-ahead to exhume the remains of Dr. H. H. Holmes in a court order dated March 9. The Archdiocese of Philadelphia, which owns Holy Cross Cemetery in Yeadon where the body was located, confirmed the exhumation was to take place but it wasn't immediately clear when the process started. WCAU-TV in Philadelphia showed footage for a front-end loader removing dirt from a grave at Holy Cross Cemetery on Friday.

Holmes, the pseudonym of New Hampshire-born physician Herman Webster Mudgett, is believed to have killed an undetermined number people at his hotel of horrors during the 1893 Chicago World's Fair. It featured a bizarre labyrinth of windowless rooms, secret passageways, false floors, trapdoors, and a vault. Most of the rooms had gas vents, which were controlled from Mudgett's bedroom. Many of the rooms were soundproof and could only be locked from the outside.

You can also read an earlier piece on Holmes via the below link:

http://www.pauldavisoncrime.com/2016/12/serial-killer-hung-in-south-philly-in.html
Posted by Paul Davis at 4:13 AM