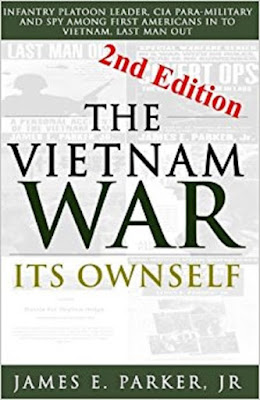 Yesterday, April 30th, was the anniversary of the fall of South Vietnam. The country fell to the North Vietnamese communist in 1975, which was a dark day in American history in my view.

All American combat troops had been withdrawn, as agreed to in the Paris Peace Agreement, but of course the communists violated that agreement by invading the South, which every Vietnam vet I knew at the time said would happen.

Richard C. Ehrlich offers a piece in the Washington Times on former CIA officer James Parker, who was one of the last Americans to bug out of Vietnam.

http://www.washingtontimes.com/news/2017/apr/30/james-parker-cias-last-vietnam-evacuee-holds-bitte/?mkt_tok=eyJpIjoiTm1KbE5XSTRObUZqWkRCaCIsInQiOiJZY1hQRnNrMW1yd1wvakRVeFNFVXNuN2ZYUHJnd0dyOUZZN3Qwdlh6ZHJPbDhjRmpLTk5TdHhOMkpCUDRJUnlLU1FxQ3lQaFQ2XC9nTGJDcDFzc09VMkdWUHFtUWdXcjgxOFJqM0dwOGxGMUlSMDRRKzJ0a1N1V2ZXNkxDRjFkWHpoIn0%3D
Posted by Paul Davis at 9:53 AM