My Washington Times Review Of 'The Ambulance Drivers: Hemingway, Dos Passos, And A Friendship Made And Lost In War' 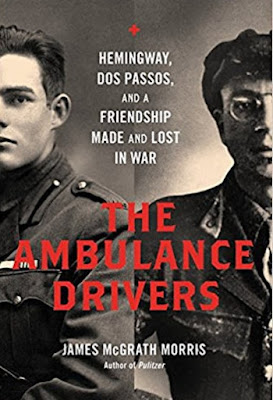 The Washington Times published my review of James McGrath Morris’ The Ambulance Drivers: Hemingway, Dos Passos, and a Friendship Made and Lost in War.

Although the late, great writer Ernest Hemingway has many detractors, he remains popular and is still read, written about and discussed today. Not so for Mr. Hemingway’s contemporary, the late novelist John Dos Passos.

But Dos Passos gets his due in James McGrath Morris‘ “The Ambulance Drivers,” a book about both writers who came of age during World War I, and became popular and critically acclaimed novelists in the post-World War I era.

I’ve been a Hemingway aficionado since my teenage years in the 1960s and I learned of Dos Passos when I read biographies of Hemingway. I went on to read Dos Passos‘ “USA” trilogy, which I found interesting, but a tough read. As an anti-communist, then and now, I was interested in reading Dos Passos due to his anti-communism, which is covered in the book.

… Their long friendship dissolved over political differences. Ironically, Dos Passos had been the leftist idealist, while Hemingway was apolitical. Both of their views, and their friendship, would change during the Spanish Civil War.

http://www.washingtontimes.com/news/2017/may/8/book-review-the-ambulance-drivers-hemingway-dos-pa/
Posted by Paul Davis at 2:08 AM