Lincoln Showed His Steel: How President Abraham Lincoln Made The Tough Decisions To End A Bloody Civil War 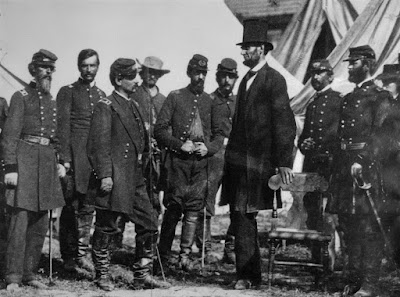 In honor of President Lincoln’s birthday today, Thomas C. Stewart offers a look at the president’s steel during the Civil War in a piece in the Washington Times.


ln Feb. 12 is the birthday of Abraham Lincoln, a man “both steel and velvet,” in the words of his biographer, Carl Sandburg.


We think of the Lincoln who made a point of very publicly asking black abolitionist Frederick Douglass his opinion of the inaugural address, “as there is no man in the country whose opinion I value more than yours.” We think especially of the numerous cases where Lincoln exercised his power to pardon. During his presidency, he personally reviewed more than 1,600 cases of military justice, generously pardoning soldiers condemned to death for desertion or sleeping on duty if he could find the slightest mitigating circumstance.


Yet, if Lincoln had not had as much steel as velvet in his character, he could never have made the tough decisions necessary to bring a bloody civil war to a victorious conclusion.

https://www.washingtontimes.com/news/2020/feb/11/how-abraham-lincoln-made-the-tough-decisions-to-en/
Posted by Paul Davis at 9:02 AM