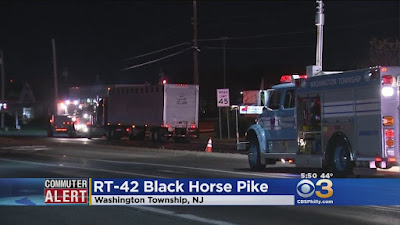 The bartender in a small dark roadside bar on the Black Horse Pike introduced himself to us as Bob as he served my friend Tony Rocco a beer and a vodka on the rocks for me.

Tony told the bartender that I was a writer and he was a photographer as we were offered menus. We ordered meatball sandwiches along with our drinks, and Bob said he was glad we were drinking, as he had been a bartender for forty years and he didn't trust a man who didn't drink.

“No problem here,” Tony told him.

We were on our way to Atlantic City to cover the trial of a South Philly mob guy later that week. The notorious mobster had been arrested by the Atlantic City Police at a diner as he was pounding away on a gambler who was behind on his payments.

As the local newspaper's crime columnist, I was going to Atlantic City to cover the trial and Tony, one the local paper’s photographers, accompanied me.

We ordered a second round of drinks and Bob again told us of his mistrust of non-drinkers.

“You’re a writer," Bob said. "You want to hear a story while you're waiting for your food to come out?”

“Well, about fifty years ago a thin man with glasses, a meek-looking guy, kinda shy, came in and sat at one of those tables. Ole Joe, the old bartender then, left the bar and went over to the table to take the man's order. The shy man hardly looked up as he ordered a cheeseburger in a low, hesitant voice.

“The bar was nearly empty except for the shy man and a group of six local boys. Young tough guys and bad boys, you might call ‘em.”

“Want a beer or something to drink with your cheeseburger?” Ole Joe asked the shy man.
“No,” the shy man said softly. “Just a glass of water.”

“Your sign outside reads Bar and Grill. I’ll just use the grill part if you don't mind.”

The group of young men heard the exchange between the shy man and Ole Joe and they laughed loudly.

The shy man ignored the insults and taunts.

After the shy man had finished his cheeseburger in silence, he got up from the table and went to the bar. He asked the bartender how much he owed him for the cheeseburger.

“Why so much?” the shy man asked Ole Joe.

“The boys over there said you was picking up their tab too,” Ole Joe said.

The shy man turned slowly towards the group of small-town toughs and then turned back to the bartender. “I never agreed to that,” he said softly.

“Listen,” Ole Joe said quietly, leaning in, “Mister, it might be better to just pay.”

The shy man told Ole Joe to call the police.

“They won’t get here in time, and I don't want to see you get hurt or my place smashed up, so just pay up, OK.”

“The local boys were all drunk and having fun and they sure was brave in a group of six,” Bob said. “Dummy Number One and Dummy Number Two got up from the table and approached the shy man at the bar.

"Hey,” Dummy Number One said to the shy man. “Why ain’t you paying for our beers and food?”

“Pay your own bill,” the shy man said softly without turning to face the two young men.

“Now Ole Joe was in the army in World War II, and he thought he saw everything,” Bob explained. “But when Dummy Number One grabbed the shy man's jacket, Ole Joe saw a blur of arms and as swift as you can imagine, Dummy Number One was on the floor screaming about his broken arm.”

Bob said the shy man also dropped Dummy Number Two to the floor as the rest of the pack charged him.

“It was all so quick that most of the bad boys didn't know what hit them,” Bob said. “But they was all on the floor with broken bones or just plain knocked out."

The shy man then said to Ole Joe, “Didn't I tell you to call the police?

“Yes, sir,” Ole Joe said as he picked up the phone.

“Well, it turns out that the man was shy, but not meek. He was some kind of soldier who was in Vietnam, and he sure knew how to fight close up and all.”

“Yeah,” Bob the bartender replied. “And don't trust a man who don't drink."

Tony and I laughed.

“I was Dummy Number Four.”